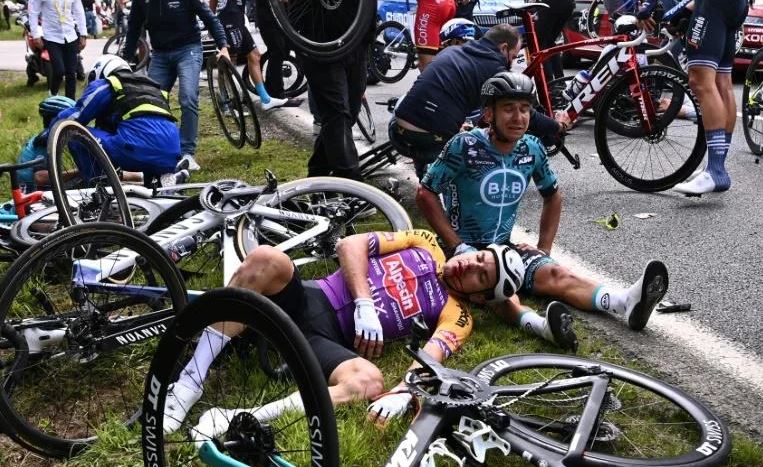 Paris: The spectator who caused a crash on the first day of Tour de France on June 26, has been arrested and is in police custody undergoing questioning.

The woman spectator had held out a banner to relay a message to her grandparents during the first round of Tour de France. Unfortunately, German rider Tony Martin who was close to the head of the pack hit the banner and fell down. Along with him, several cyclists fell.

It was earlier believed that the spectator had fled France to escape punitive measures.

However, CNN reported on Thursday that the woman has been identified and arrested.

“On Sunday (June 27), the Finistère gendarmerie announced the opening of a judicial investigation into “involuntary injuries with disability not exceeding three months by a deliberate violation of an obligation of safety or prudence”,” said a report by cnn.com.

The woman may face up to two years in prison and a fine of $35,000, according to the prosecutor’s office of Brest, a port city in France.

Meanwhile, defending champion Tadej Pogacar claimed an easy time trial victory on Stage 5 of Tour de France as Mathieu van der Poel held on to the yellow jersey, which is given to the overall leader.

The 22-year-old Slovenian Pogacar finished the 27.2km course in 32 minutes, which was 19 seconds quicker than Swiss cyclist Stefan Kung in second on the day.

“It was a really good day for me, luckily I had perfect conditions. I gained time so I’m super happy and excited,” said Pogacar, won his fourth stage at the Tour.