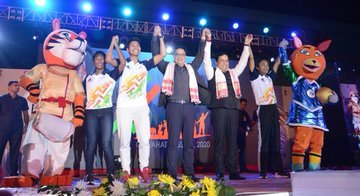 Guwahati: Sports minister Kiren Rijiju has launched the third edition of the Khelo India Youth Games which is scheduled to be held from January 10 to 22 here.

The third edition will have two additional sports — Cycling and Lawn Bowls as over 10,000 participants from across the country participate in a total of 451 medal events during the 13 action-packed days.

Besides Rijiju, Assam Chief Minister Sarbananda Sonowal was also present as the composite logo, players jersey, Mascots and the theme song of the 3rd edition of the Games was launched at the Karmabir Nabin Chandra Bordoloi Indoor Stadium here.

Top athletes Hima Das, Swapna Burman and Lovlina Borgohain also joined the ceremony, which was attended by a host of dignitaries from the world of sport.

“The Khelo India Youth Games is one of the most empowering initiatives of the Indian Government that hopes to not only give a platform to youngsters from all over the country to make a future in sport, but also to build India into a sporting nation,” Rijiju said at the launch ceremony here.

“I invite every sports-loving and talented youngster to grab this opportunity and begin his or her journey towards excellence. Playing sport is also a great way to build one’s character and have a fitter body and mind,” he added.

The Khelo India Games was launched in 2018 to imbibe a culture of sports in the country.

“I am delighted to welcome the Khelo India Youth Games to Assam. The Games will surely inspire all the children in the state as well as the entire North-East region to take up sports and bring glory for themselves, our state and indeed our country,” Sonowal said.

Maharashtra, Haryana and Delhi have been amongst the top three in the previous editions, with Haryana emerging as the winners in the inaugural year.

Close to 3,000 promising and talented athletes have already benefitted from the Khelo India Scheme, each of them winning a scholarship of Rs 5 lakh per annum, with Rs 1.2 lakh going directly into their account, annually for eight years.