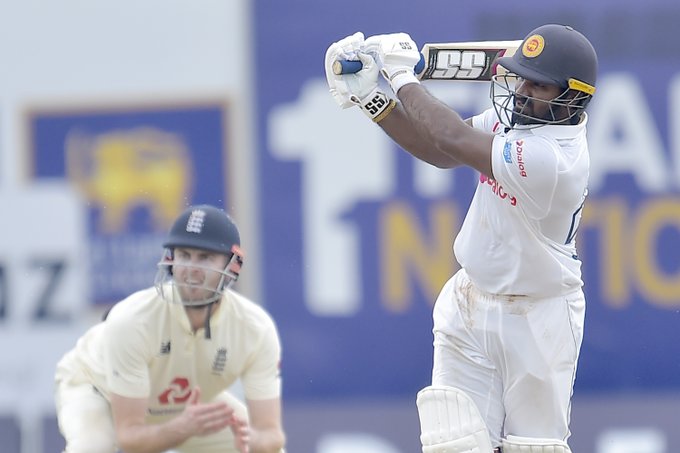 Galle: Sri Lanka have had a difficult two days against England in Galle, but they roared back on the third day to emphasise just why they are such a force at their fortress.

After their spinners triggered a slide in the England line-up, their batsmen put in the sort of solid effort expected of them in their turf, whittling down the deficit to end the day at 156/2, 130 runs in arrears.

By the time stumps were drawn, the mood in the Sri Lankan camp was markedly different from what it was on the last two days.

Play on Day 3 had resumed with England on 320/4, boasting a lead of 185. However, they encountered a relentless Sri Lankan attack this morning, and they were able to add just 101 runs to their overnight total.

A lot of that came from Root and Buttler, who extended their overnight partnership to 68, with Root becoming the seventh England batsman to score 8000 Test runs en route.

The slide began when Buttler was snared off a full delivery from Asitha Fernando, the subtle movement away off the seam prompting a thick edge from the batsman that was pouched by the wicket-keeper.

Root soon completed his fourth Test double-century – his second against Sri Lanka, having scored one against them in 2014 at Lord’s – but four of the next five batsmen were dismissed for single digits, as Sri Lanka sensed an opening.

On the very next ball after dismissing Buttler, Fernando had Sam Curran dismissed with another full delivery. England didn’t help matters.

In the next over, Dom Bess was run out for nought after he set off for a run while the Sri Lankans appealed for an lbw against Root, only to realise his partner had stayed his ground.

Thereafter, it was all down to Root to keep the score ticking, as Sri Lanka chipped away at the other end. Jack Leach was trapped in front by Dilruwan Perera, who then had Mark Wood caught behind in his next over. Stuart Broad, coming in at No.11, came out swinging to put away a couple to the fence.

However, Root, with the onus now on scoring quickly, holed out off Dilruwan, as England lost their last six wickets for 49 runs.

England still had a huge lead over Sri Lanka, and would have hoped to repeat their efforts in the first innings, when they bundled out Sri Lanka for 135. However, this time around, the hosts were a different force.

Their openers, Kusal Perera and Lahiru Thirimanne, added 101 runs for the opening wicket, with Kusal doing the attacking from one end even as Thirimanne sealed up the other. They ensured they didn’t lose a wicket in the second session, and put on as many as 90 runs by tea.

They brought up the 100 mark shortly into the final session, before Kusal gave his wicket away, attempting a waft at a short and wide delivery off Curran, only to pick out the man at deep point. Unlike in the first innings, however, the wicket didn’t trigger a slide.

Kusal Mendis partnered Thirimanne in a more attritional partnership. They put on 54 runs off 135 balls, and looked good to help Sri Lanka get through the day without losing another wicket.

However, late in the day, Leach had his man, drawing Mendis forward and finding a thin edge through to the ‘keeper.

Despite that setback, Sri Lanka could draw encouragement from a good day, although England still hold the advantage.