Stars of India: A look into best ever Olympic performances which made the country proud 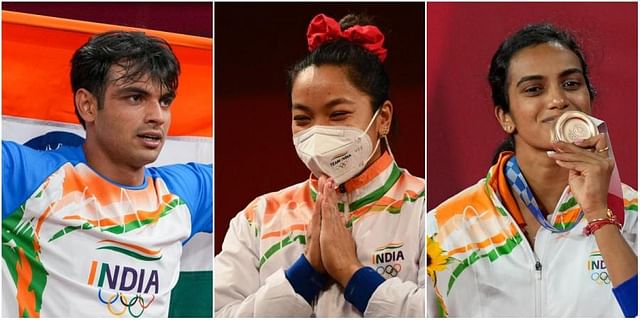 Tokyo: India capped off its best-ever performance in the Olympics with a haul of seven medals, including a gold. As the Tokyo Olympics come to a close, PTI takes a look at the medallists and those who came within touching distance of glory but couldn’t quite make it to the podium.

They say save the best for last and for India it came true at the Tokyo Games. Javelin thrower Neeraj Chopra became only the second Indian to win an individual gold in the Olympics. After romanticising stories about “nearly there” for years, India finally had its first track-and-field medal winner, thanks to Chopra’s throw of 87.58m.

Interestingly, Chopra, the son of a farmer from Khandra village near Panipat in Haryana, took to athletics to lose weight. One day, his uncle took him to Shivaji Stadium in Panipat for some running. But Chopra wasn’t interested in it and almost instantly fell in love with javelin throw when he saw a few seniors practising at the stadium.

The 23-year-old, a Subedar with 4 Rajputana Rifles in the Indian Army, has been a consistent performer since bursting into the scene with a historic gold in the junior world championships in 2016 with an Under-20 world record of 86.48m which still stands.

His other achievements include gold medals in the 2018 Commonwealth Games and the Asian Games, besides the top finish in the 2017 Asian Championships.

The pint-sized weightlifter from Manipuri lifted the spirits of the entire nation as she ended a 21-year wait for a medal in weightlifting, clinching a silver medal in the 49kg category to open India’s account on the very first day of competitions on July 24.

Wearing gold earrings shaped like the Olympic rings, which were a gift from her mother who sold her own jewellery for them five years ago, the 26-year-old lifted a total of 202kg (87kg+115kg), finally exorcising the ghosts of her disastrous outing in the 2016 Rio Games where she had failed to log a single legitimate lift.

Born to a poor family in Nongpok Kakching village about 20 kilometres from Imphal, Chanu’s childhood was spent cutting and collecting wood from the nearby hills, hauling them up by herself, and fetching water from nearby ponds in milk powder cans.

The 2017 world champion had initially wanted to be an archer but fate had different plans, and reading about fellow Manipuri the legendary N Kunjarani Devi’s exploits in the weightlifting arena all over the world, inspired Chanu to take up the sport.

The 23-year-grappler born in the Nahri village of the Sonepat district in Haryana stormed to the final of the men’s 57kg freestyle event without any fuss. Although, he fetched a silver, his immense strength and stamina along with technical prowess impressed one and all.

Born to a farming family, Dahiya is a product of the national capital’s Chhatrasal Stadium, which has already given India two Olympic medallists — Sushil Kumar and Yogeshwar Dutt. He rose to prominence only when he qualified for the Tokyo Games with a bronze medal-winning effort at the 2019 world championship.

He has steadily gown in stature ever since, winning the Asian Championship in 2020 and then defending the title this year. His father, Rakesh Kumar, would himself carry milk and butter to Chhatrasal Stadium, about 60km away from his home, every single day without fail to ensure that his son got the best diet.

One of the strongest medal contenders heading to the Tokyo Olympics, PV Sindhu delivered once again. This time snatching a bronze. The 26-year-old etched her name among the all-time greats after winning women’s singles bronze medal to add to the silver she won at Rio de Janeiro five years back.

She became the first Indian woman and second overall from the country to achieve the feat. Such was her dominance at the Tokyo Games that she dropped only two games, both in the semifinal loss to Tai Tzu Ying, in six matches.

The Hyderabad shuttler rose to fame at the international level in 2014 when she won bronze medals in the world championship, Asian Games, Commonwealth Games and Asian Championships. One of the most consistent performers, Sindhu has returned with medals from each one of the big-ticket events she has participated in.

Four decades of pain and disappointment was washed away as the Indian men’s hockey team clinched the bronze, the country’s 12th Olympic medal in the sport that came after a gap of 41 years.

It wasn’t gold but it was enough to spearhead the revival of the sport in a country that attaches so much sentimental value to it.

After the initial hiccup which saw the team being steam-rolled 1-7 by Australia in their second game, Manpreet Singh and his men made a strong comeback only losing to eventual champions Belgium.

While Manpreet inspired the team with his leadership, goalkeeper PR Sreejesh had a phenomenal tournament, standing like a wall when the opposition mounted an attack. It seemed the team was destined to win.

How else could one explain the addition of Simranjeet Singh, who scored a brace in the crucial bronze playoff, when he wasn’t even a part of the original squad and had been added following the International Olympic Committee’s decision to allow “alternate athletes” in team events because of the COVID-19 pandemic.

Competing in her maiden Olympics, Borgohain carved a niche for herself in the history of Indian women’s boxing by clinching a bronze — India’s lone boxing medal at the Tokyo Games. The 23-year-old, who was brought up in Baro Mukhia village of Assam’s Golaghat district, used to be a kickboxer, like her two elder sisters, before she turned to boxing.

A day before she was to leave with the Olympic-bound boxers group for a training camp to Europe, Borgohain had contracted COVID-19. But the missed opportunity couldn’t stop her from having a remarkable campaign in which she upstaged former world champion Nien-Chin Chen of Chinese Taipei in the 69kg category.

With the feat, she became only the third Indian boxer ever, after Vijender Singh and MC Mary Kom, to finish on the podium at the quadrennial showpiece.

A favourite heading into the Games, Bajrang didn’t quite live up to the sky-high expectations of becoming the first Indian wrestler to win the gold, but the 27-year-old did return from Tokyo with a bronze medal, an impressive feat in a nation starved for success at the grandest sporting spectacle.

Bajrang has been passionate about wrestling since childhood, and why not, the sport runs in his blood. His father and elder brother, too, were ardent practitioners of the sport. As a kid all he wanted was to wrestle.

Once at a Dangal, when he was about 34kg, Bajrang insisted that he be allowed to wrestle but the competition was meant for those who weighed about 60kg and to the amazement of everyone, he pinned his opponent, giving a glimpse of his determination.

Those who were so close yet so far:

From a bottom-place finish at Rio 2016, the Indian women’s team capped a remarkable journey at Tokyo Olympics, finishing a creditable fourth.

Although the team’s dream of securing its maiden Olympic medal remained unfulfilled as it lost 3-4 to Great Britain in the closely contested bronze medal play-off, the side recorded its best ever finish at the Games.

After three losses on the trot, everyone had written them off. But a moment of brilliance by skipper Rani Rampal that led to a late strike by Navneet Kaur in the game against Ireland kept the team’s quarterfinal hopes alive.

A win against South Africa, that saw Vandana Kataria strike a hat-trick, and a favourable result helped ensure India’s passage to the quarterfinal, where drag flick specialist Gurjit Kaur rose to the occasion when it mattered the most, converting a PC against the mighty Australians.

With the odds stacked firmly against them a brave and determined women’s team etched its name in the history books by entering its maiden Olympic semifinals.

After an impressive campaign that saw him race to the semifinals, Deepak Punia was only 10 seconds away from a medal, but the 22-year-old debutant ended up conceding a take-down in the 86kg freestyle bronze medal play-off.

Wrestling was just a route that Deepak hoped would find him a good job to help sustain his family. He was offered the post of a sepoy in the Indian Army back in 2016 but was told to dream big and not settle for little things.

He took the advice of two-time Olympic medallist Sushil Kumar seriously and has gradually made his mark. He became a World Cadet champion in 2016 and in 2019 won the junior World title, only the fourth Indian ever to do so.

Aditi Ashok captured the imagination of the entire country as sports lovers turned on their tv sets in the wee hours to watch golf, trying their hardest to understand the concepts of the game. Ranked 200 in the world, the 23-year-old from Bengaluru competed toe-to-toe against the best golfers in the world.

But, alas it wasn’t meant to be as after coming agonisingly close, Aditi finished fourth. Aditi started playing golf at the age of five. At the Rio Olympics, where she finished 41st, Aditi was the youngest player.

She had her father as caddie in Rio while it was her mother joining her in Tokyo.

Wins, losses and a whole lot of improve: How Tokyo Olympics has been the most off-script Games