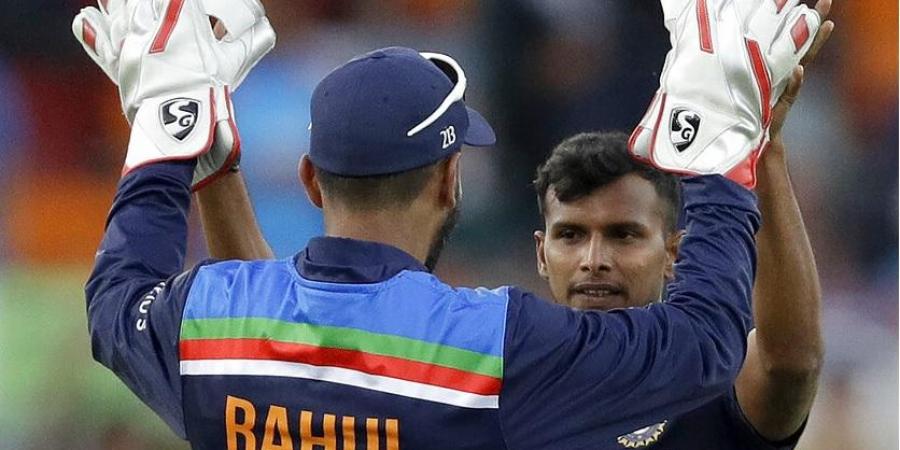 New Delhi: Pacer T Natarajan on Thursday said it was a ‘surreal experience to represent the country’ after making his ODI debut in the third game against Australia at the Manuka Oval in Canberra.

The speedster from Tamil Nadu gained popularity in the latest edition of Indian Premier League where he was labelled as the ‘yorker machine’. Natarajan played for Kings XI Punjab and bagged 16 wickets in as many games in the 13th edition of the cash-rich league.

His performance in the IPL handed him an India call-up. He was first included in the shortest format squad and later on added as back-up in the ODI side by the BCCI. This decision was taken as pacer Navdeep Saini complained of back spasm.

“It was a surreal experience to represent the country. Thanks to everyone for your wishes. Looking forward for more challenges,” Natarajan tweeted.

India skipper Virat Kohli handed the cap to the 29-year-old bowler before the match. In his debut game, he returned figures of 2-70 in his ten overs including a maiden. He bagged two crucial wickets of Marcus Labuschagne and Ashton Agar and derailed Australia’s run-chase.

The debutant got support from Shardul Thakur as he clinched three wickets.

India registered a 13-run win in the final ODI and opened their account in the ODI Super League while Australia took the series 2-1.

Both the sides will now lock horns in the three-match T20I series, beginning Friday.Luck was on India’s side to begin with as Kohli won the toss for the first time in the series and decided to bat. While the top-order failed to fire in unison, the middle-order rose to the challenge and both Hardik Pandya and Ravindra Jadeja played match-winning knocks of 92 and 66 respectively to guide India to 302/5.

Kohli himself played a knock of 63 runs. The addition of Shardul Thakur, Natarajan, and Kuldeep Yadav also rejuvenated the bowling in the third ODI as the side was finally able to take wickets at regular intervals.

For the first time in the last six ODIs, the Men in Blue also managed to take a wicket in the powerplay overs.

Aaron Finch played a knock of 75 runs, while Glenn Maxwell and Aston Agar tried their best to take Australia over the line. But in the end, Kohli and the boys managed to hang on to register a win.