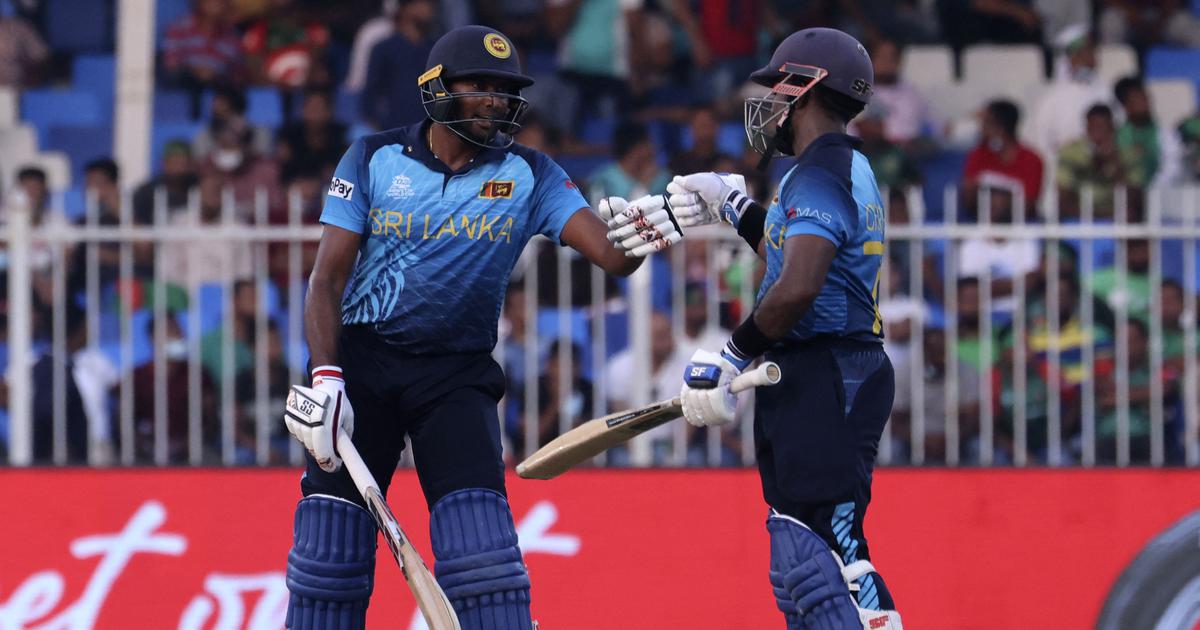 Chasing an imposing target of 172, the 2014 champions saw Charith Asalanka (80 not out) and Bhanuka Rajapaksa (53) lead them to victory for a fourth successive win after three triumphs in the qualifying round.

Earlier, Mushfiqur Rahim, with an undefeated 57 and opener Mohammad Naim, who hit 62, starred for Bangladesh in the Super 12 game after being put into bat.

England, Australia, South Africa and West Indies are the other teams in the group from where the top two will make the semi-finals.

“I am happy to hit a winning knock for my country,” said Asalanka who got the winning runs off a boundary with seven balls to spare.

“When I faced the first ball, it looked like a good pitch and I backed myself to play my natural game. Rajapaksa played a brilliant knock and he changed the momentum.”

Asalanka made his runs from 49 balls, hitting five boundaries and five sixes as he and Rajapaksa put on 86 for the fourth wicket.

Both men were dropped by Liton Das with Rajapaksa reprieved after he had made only 14.

The lone bright spot for Bangladesh in the field was the two wickets in four balls by Shakib Al Hasan to dismiss Pathum Nissanka and Aviskha Fernando.

That allowed the veteran all-rounder go to 41 wickets, surpassing Pakistan’s Shahid Afridi for most victims in T20 World Cups.

“We were in the game till the tenth over. But things went wrong for us after that.”

Bangladesh had made 40 by the sixth over before they lost their first wicket and the sparks flew.

Liton Das (16) was caught by Sri Lanka skipper Dasun Shanaka at mid-off trying to hoist Lahiru Kumara into the outfield.

However, Liton and Kumara then exchanged angry words with fellow Bangladesh opener Naim pushing away Kumara.

Both umpires had to intervene before the game continued.

Kumara went on to bowl a ‘beamer’, clocked at over 140kmh, at Mushfiqur in the penultimate over, forcing the Bangladesh player to take evasive action.

Naim made 62 from 52 balls before he was eventually dismissed in the 17th over, caught and bowled by Binura Fernando.

Naim and Mushfiqur Rahim put on 73 for the third wicket as Bangladesh upped the pace.

The classy Mushfiqur reached his sixth T20 half century off 32 balls with four boundaries and two sixes.

Sri Lanka were without key spinner Maheesh Theekshana who had claimed eight wickets in three qualifying matches as Sri Lanka swept into the Super 12 stage. The 21-year-old had been suffering with a back injury.