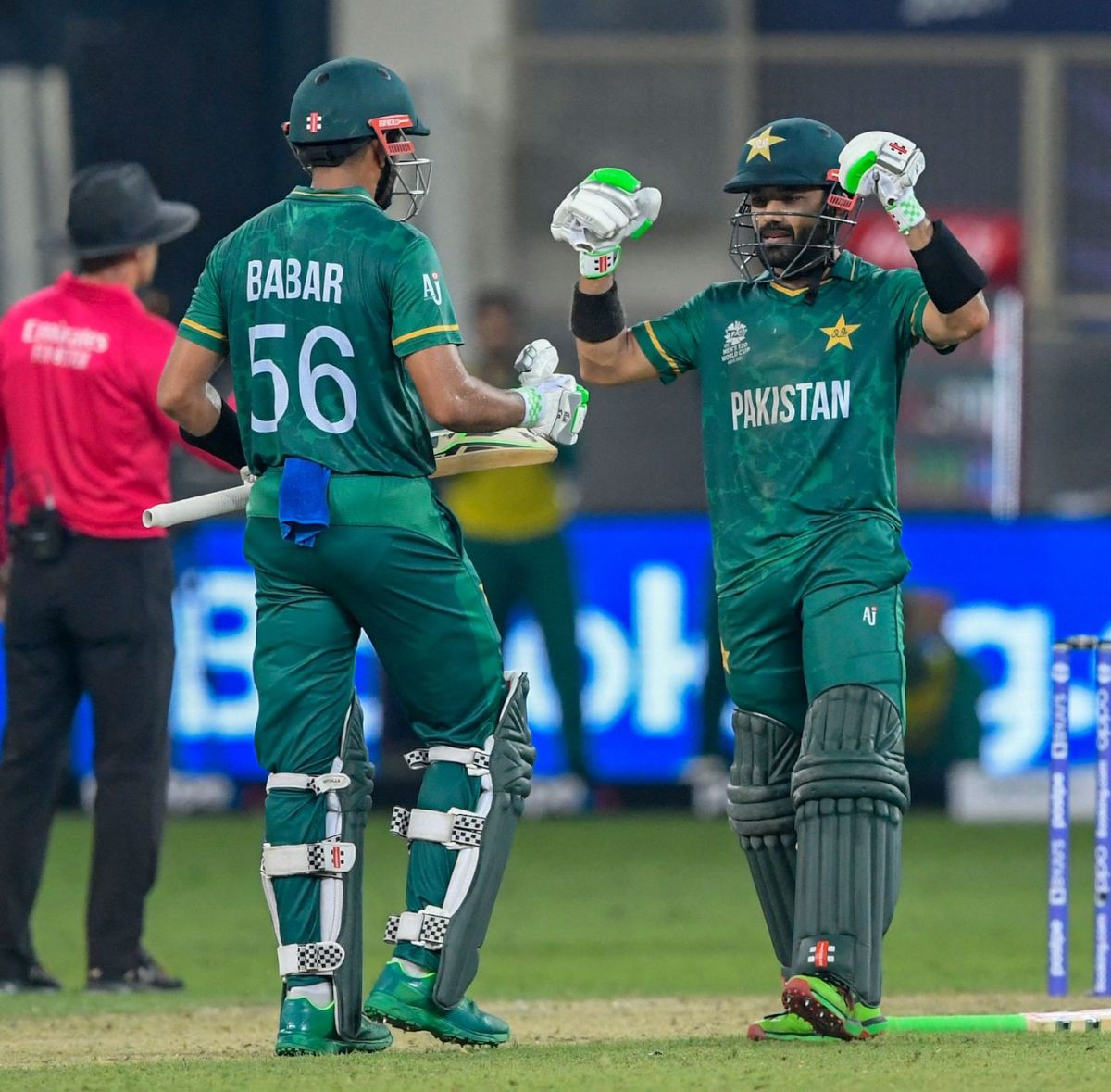 Dubai: Team India lose to Pakistan for the first time in T20 World Cup as Babar and Rizwan stitched together a brilliant 152 run opening partnership.

Skipper Virat Kohli wasn’t at his fluent best but his 57 off 49 balls was the saving grace in India’s middling score of 151 for seven against Pakistan in their opening Super 12 match of the ICC T20 World Cup here on Sunday.

His 29th half-century in T20 Internationals wasn’t as good as some of his other innings but considering that he diffused a potentially troubling situation created by Shaheen Shah Afridi’s (3/31 in 4 overs) menacing opening spell, this knock was significant.

Shaheen also did his bit at the death, removing the Indian skipper in the penultimate over.

Kohli got support from Rishabh Pant (39 off 30 balls) during a 53-run stand but had to do the bulk of heavy lifting in a pressure cooker scenario, something he has been accustomed to for the past one decade.

His innings had five fours and a six as India managed a score which would give the bowlers at least something to fight for on a track that can’t exactly be called batting-friendly. In an India-Pakistan game, one should always add “20 invisible runs”, simply because of the weight it carries.

Shaheen, one of the most exciting fast bowlers produced two unplayable deliveries at the biggest stage under pressure, which any batter would have found difficult to negotiate. The most difficult delivery from a left-arm fast bowler is the one that holds the line just when the batter had committed for the angle.

In the case of Rohit (0), before he could adjust his footwork, he got one that was pitched on block hole and straightened. It caught him plumb in-front. KL Rahul (3) thought that the ball will straighten but it shaped in to breach his defence and disturb the off-stump.

Suryakumar Yadav (11) did get a six over backward square leg off Shaheen and a boundary off Imad Wasim (0/10 in 2 overs) but Hasan Ali bowled one back of the length which he edged while trying to cut and a diving Mohammed Rizwan behind the stumps pouched it.

Pant joined Kohli as the Powerplay score read a disastrous 36 for three. They added 53 runs in 6.4 overs to get some momentum back in an exciting stand dominated by the left-hander. The Indian captain did show Shaheen, who is the boss as he made room by shuffling towards leg-stump and lofted him straight into his team’s dug-out for a six.

For Hasan Ali, he reserved an exquisite square drive before he let Pant take over the show, having partially stabilised the initial rot. Watching that there is a fielder placed at ’45’, Pant first played a lap shot off leg-spinner Shadab Khan (1/22 in 4 overs) and then back-cut Mohammed Hafeez from the middle-stump to get two boundaries.

But the real fun was when he smoked Hasan for two one-handed sixes. Shadab had the last laugh as a mistimed slog sweep turned into a return catch. Kohli, who was playing the second fiddle then took charge as he attacked Hasan with a pull-shot and a then played a cover drive as 10 runs came off the 16th over.

However, Pakistani bowlers didn’t err much at the death to keep the score under check, credit for which should go to Harris Rauf (1/25 off 4 overs).

Pakistan captain Babar Azam won the toss and elected to bowl first against India in a high-octane Group 2 match in Super 12 of the ICC Men’s T20 World Cup at the Dubai International Stadium here on Sunday.

After winning the toss, Azam said that Haider Ali was left out from the 12-man shortlist for the playing eleven. “We’ll look to take early wickets and put pressure. Dew is also a factor. We have had good practice sessions and are confident about our preparations. Pakistan’s bowlers are known to trouble other teams but I am confident about our batting too.”

India skipper Virat Kohli said Rahul Chahar, Ishan Kishan, Ravichandran Ashwin and Shardul Thakur are the four non-playing members of the squad. “We are pretty happy with setting the target. We would have bowled first too, but the toss is not in your control. We are pretty balanced with our squad and you need to be prepared for it. We need to stay as professional as possible. We need to stay focussed on the processes. Everyone watches it closely all over the world. We need to ensure we don’t get too emotional. The pitch looks very different. Evenly rolled and there is no grass at all which was the case during the IPL. We expect the pitch to stay good all through and set a good total.”