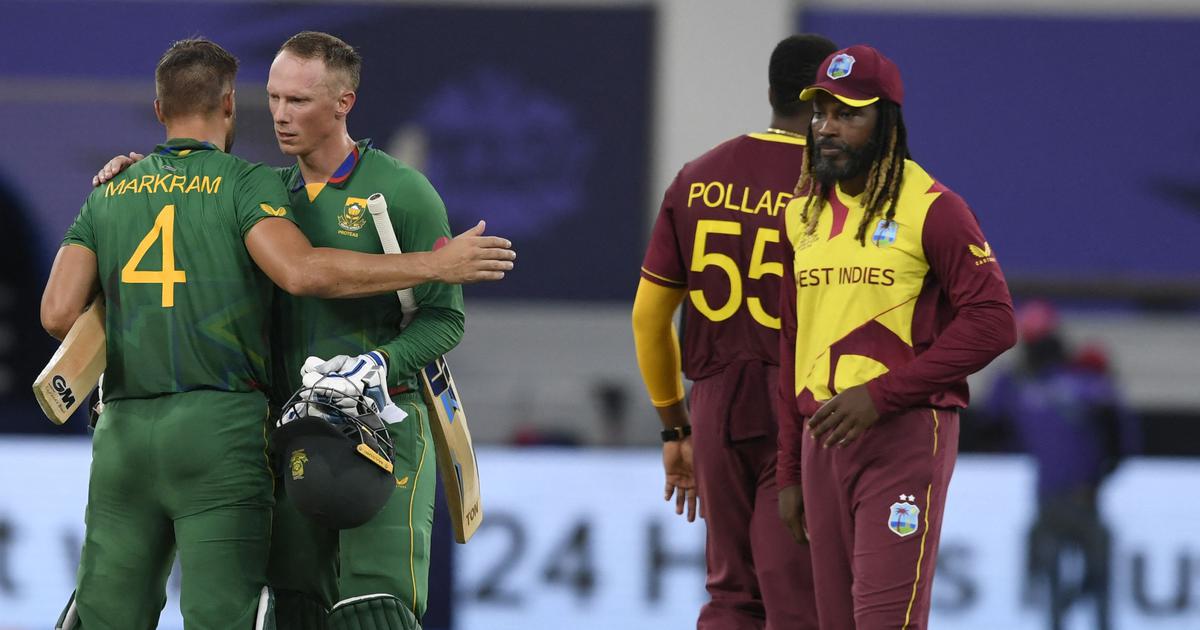 Aiden Markram smashed 51 to lead South Africa’s chase of 144 in an unbeaten 83-run third-wicket stand with Rassie van der Dussen (43) to achieve their target with 10 balls to spare in the Super 12 contest.

South Africa bounced back from their opening loss to Australia, while two-time champions West Indies have lost both their matches.

Cricket South Africa ordered its players to kneel in Dubai and lend their support to the anti-racism movement and then it was revealed at the toss De Kock pulled out of the game due to “personal reasons”.

“When the news hit us it did kind of take us back as a team,” Bavuma said of the decision by De Kock.

“A guy like Quinnie, he obviously plays an integral role within the team, not just with the bat but as a senior player.

“But with that, (Heinrich) Klaasen coming in there was an opportunity for him, it was another game of cricket that we had to play for our country and we had to live up to that.”

Opener Evin Lewis hit 56 in West Indies’ 143-8 as they suffered another heavy loss, having made just 55 in a crushing defeat by England three days ago.

Fast bowler Dwaine Pretorius took three wickets as West Indies again failed to fire after a painstaking 16 off 35 balls from Lendl Simmons at the top of the order.

Skipper Kieron Pollard hit a useful 20-ball 26 before falling to Pretorius, who was on a hat-trick only for Dwayne Bravo to hit a boundary.

After a sedate start, Lewis took the attack to South Africa by smashing boundaries off pace bowler Kagiso Rabada and spinner Markram, who opened the bowling.

The left-handed Lewis reached his 10th T20 fifty with a six before getting out to Keshav Maharaj.

Maharaj struck again with his left-arm spin to send back Nicholas Pooran for 12 and Rabada ended Simmons’ struggle the following over.

West Indies dropped Chris Gayle from three to four in the batting order but the change in position barely helped as the big-hitter fell for 12.

Anrich Nortje bowled the powerful Andre Russell for five and returned economical figures of 1-14 from his four overs of pace.

“After six overs he (Lewis) was there and we wanted to bat a couple more overs without losing wickets,” said Pollard.

“Having said that you are not going to get me here throwing my teammates under the bus. It was a disappointing total batting effort not getting 160 plus.”

In reply, South Africa lost Bavuma, run out for two, but Reeza Hendricks and Van der Dussen put the innings back on track with their partnership of 57.

Hendricks fell to Akeal Hosein for 39.

Van der Dussen was joined by Markram and the two helped South Africa cruise across the line in a game that began with the shocking news of De Kock’s withdrawal.

Markram brought up his fifty in 25 balls with a six off Russell and then hit the winning runs.

The South African board later said they “await a further report from team management before deciding on the next steps”.