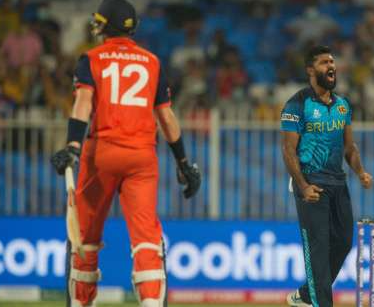 New Delhi: Bowlers Wanindu Hasaranga and Lahiru Kumara set up a crushing eight-wicket win for Sri Lanka in the final round-one match of the Twenty20 World Cup after they skittled out Netherlands for 44 on Friday

Sri Lanka moved into the Super 12 stage with three wins and top of their group ahead of Namibia who shocked Ireland in the first match of the day in Sharjah.

Hasaranga and Kumara took three wickets each to sink the opposition who survived just 10 overs after being invited to bat first.

The bowlers justified captain Dasun Shanaka’s decision to field as spinner Maheesh Theekshana struck twice in his first over after the skipper ran out Max O’Dowd for nought with a direct throw.

Hasaranga kept up the pressure with his twin strikes in his opening over and soon claimed skipper Pieter Seelaar.

Kumara returned to clean up the tail and claim T20 best figures of 3-7 with his pace bowling.

The Dutch though can take consolation that it was not the lowest total – they were bowled out by the same opponents for 39 in a T20 World Cup match in 2014.

The Netherlands lost all their three games in the qualifying phase.

In reply, Sri Lanka lost two wickets before Kusal Perera, on 33, and Avishka Fernando, on two, steered the team home in 7.1 overs.

I am ready to back Warner’s ability and judgement, says Australia captain Finch

Decision to step down was Kohli’s, there was no external pressure: Ganguly