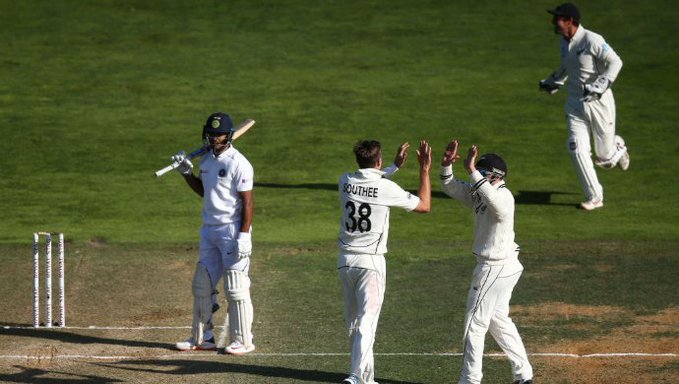 Prithvi Shaw has missed training due to a swelling on his left foot.

Mumbai: The postmortem of India’s crushing 10-wicket loss to New Zealand in the first Test shows that Team India fell behind from the very beginning.

The team management must be busy to scrutinize what went wrong. As stated earlier, the first two days at Basin Reserve set the tone for the match. What Team India must do is to ensure that it doesn’t become the tone for the series.

It is the percentage of moisture that determines the behavior of the pitch. In places like New Zealand or England the moisture is generally on the higher side.

The home team’s two towering pace bowlers Tim Southee and Kyle Jamieson were successful in extracting extra bounce from the pitch. They bowled at the corridor of uncertainty that troubled India’s batsmen.

Prithvi Shaw, only 1.65 metres tall, in particular found the going difficult. He and his colleagues were forced to fend and handed the initiative to the Kiwis.

Now fingers would be pointed at Indian batsmen for their failure. But it should be kept in mind that had New Zealand batted first, they also would have found 1.93m long Ishant Sharma a handful proposition.

The pitch, however, eased out in the second day and Ishant bowled with venom to trouble the Kiwi batsmen, but by then India had fell a long way behind.

Where New Zealand pacers edged their Indian counterparts was that they got the ball to move in as well as out. Apart from Ishant, our other pacers couldn’t swing the ball as much as they should have.

Swinging the cricket ball doesn’t depend on nature of the pitch. It has to do more with utilisation of the shine of the ball and hitting the right length.

Former Australia pacer Jason Gillespie, who has Sharma’s coach at Sussex in the 2018 County season in England, has made him realise the importance of bowling at the right length.

Sharma has only 11 five-wicket hauls in his 12-year-old career, which is less when compared with the total number of Test wickets (297) claimed by him so far.

He has become a lot more mature and smarter with line and length and the use of conditions. As he said after the first Test that it was important to control the swing amidst a breeze that blew across the Basin Reserve ground.

The home side bowlers are used to conditions and know how to utilise them but for Indians it was very important to adapt quickly.

At the international stage, how quickly you make yourself in tune with the playing conditions determine how much successful you are.

Once India scored only 165 runs in the first innings, India were up against it. They came under even more pressure when New Zealand went past the 300- run mark, taking a healthy first innings lead.

Our bowlers went for runs. Jasprit Bumrah still hasn’t found his rhythm after returning to the team from a stress fracture injury.

He should have played a couple of matches in domestic cricket to attain the desired rhythm. Match fitness helps a bowler get his rhythm, which is very important for bowlers.

If legendary Australia pacer Glenn Mcgrath could be asked to prove his match fitness in a Sheffield Shield match and monitored by Aussie selectors, what’s stopping Bumrah from playing in one Ranji Trophy match before turning out for India?

As the New Zealand camp said, they didn’t fancy taking him for runs. They preferred to play him out, a ploy that paid handsome dividends.