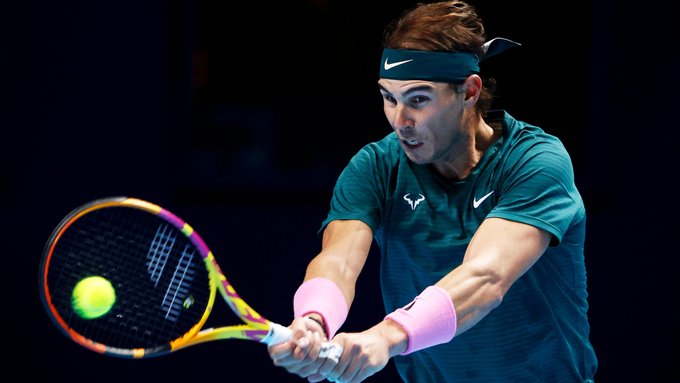 London: Rafael Nadal knew that if he lost at the Nitto ATP Finals on Thursday evening, his season would be over.

And the Spaniard battled hard to beat defending champion Stefanos Tsitsipas 6-4, 4-6, 6-2 and earn a semi-final spot. Tsitsipas was eliminated from the season finale.

Nadal is into the semi-finals at this event for the sixth time as he continues his pursuit of a maiden title at the year-end championships. The World No. 2 tallied a 2-1 record to claim second place in Group London 2020 behind Dominic Thiem.

“[To] be in the semi-finals here, in the last tournament of the year, is an important thing,” Nadal said in his on-court interview. “[I am] happy for that and I am looking forward to the semi-finals against Daniil [Medvedev].”

One year ago, Nadal battled past Tsitsipas in the final round-robin match after two hours and 52 minutes, but the lefty was still ousted from the tournament.

This time, he only needed a win to move on, and despite a slip at the end of the second set, he emerged victorious after two hours and five minutes to extend his ATP Head2Head lead against the Greek to 6-1.

“I still won two matches like last year,” Nadal said. “Last year, I was a little bit unlucky not to be in the semi-finals. The year before I had to pull out. It is always difficult to play here against the best players in the world every single day [at the] end of the season.

“Most of the time, you get here a little bit tired, but this year is a little bit different… I am just excited to be in the semi-finals and I hope to be ready to try my best.”