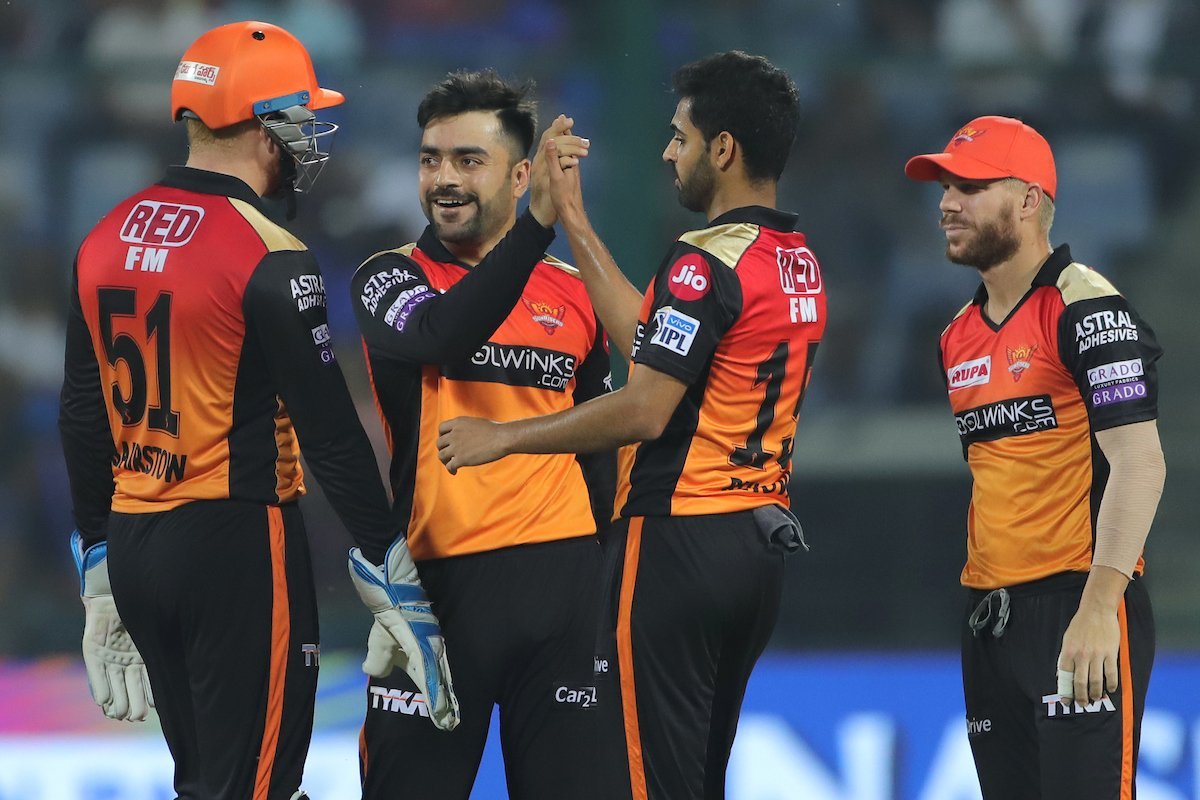 New Delhi: The result was perhaps a fore gone conclusion even before a ball had been bowled.

One of the teams to beat in this year’s Indian Premier League (IPL) Sunrisers Hyderabad stayed true to the form book, overpowering Delhi Capitals by five wickets here on Thursday.

This was Hyderabad’s third victory in the four matches they have played so far.

They have climbed to the top of the IPL table with six points.

Their tally is the same as Kings XI Punjab and defending champions Chennai Super Kings. But the Sunrisers are ahead due to a superior net run rate.

Delhi succumbed to their third loss of the season and are fifth with four points from five matches.

Jonny Bairstow is awarded the Man of the Match award for his brilliant innings of 48 off 28 deliveries 😎😎 pic.twitter.com/5lBiMI0lqB

Opting to bowl first, Hyderabad rode a strong show by their bowlers to take control of proceedings right from the start.

Yet another poor batting performance saw the hosts eke out a meagre 129/8 in their 20 overs.

Hyderabad then fought off a valiant effort by the Delhi bowlers to score 131/5 in 18.5 overs.

As is their general practice, Delhi struggled to get going right from the start.

Skipper Shreyas Iyer waged a lone battle for Delhi even as his teammates kept on coming and going at the other end.

He was the highest scorer among the hosts, posting a patient 43 runs off 41 deliveries.

Prithvi Shaw had started the Delhi innings in promising fashion, smashing the very first ball of the match for a boundary through the off-side.

But Hyderabad pacer Bhuvneshwar Kumar – who was at the receiving end of that elegant stroke – exacted revenge in his next over, deceiving Shaw with a slower delivery which went on to uproot the off-stump.

Shaw’s opening partner Shikhar Dhawan was the next to depart, top edging an easy catch to Sandeep Sharma at short fine leg off Mohammed Nabi’s bowling.

First away victory for the @SunRisers 🙌🙌 pic.twitter.com/Wi21ciBDne

Rishabh Pant failed to fire yet again as Nabi scalped his second wicket soon after.

The hosts continued to lose wickets at regular intervals as the run rate crawled at snail’s pace.

After Iyer was scalped by Rashid Khan in the 17th over, chances of the hosts posting a challenging total was as good as over.

Chasing what apparently an easy target, the Hyderabad batsmen struggled on the low and slow Kotla wicket and survived a few late blows by the Delhi bowlers to romp home with nine balls to spare.

David Warner and Jonny Bairstow gave the chase a flying start with an opening partnership of 64 runs in 6.5 overs.

Bairstow was the man in form, plundering 48 runs off 28 deliveries.

But the hosts made a strong comeback with Kagiso Rabada, Axar Patel, Rahul Tewatia, Ishant Sharma and Sandeep Lamichane claiming a wicket each.

But whatever faint hopes of a Delhi win the sizeable local crowd at the Feroz Shah Kotla might have entertained soon turned to dust as Nabi finished off proceedings in style with a six off Rabada.