Mumbai: In the corridors of Board of Control for Cricket in India’s (BCCI) politics, it has always been a case of non-cricketers ruling over cricketers as far as governance of the game is concerned.

It was always said ‘you play the game, we will manage the game’. Over the years when the game had no money, many non-cricketers administered the game admirably.

Money came into the coffers of BCCI only when Jagmohan Dalmiya and IS Bindra came into power in 1994. Before that, for 50 years, the Mahrarajas and rich industrialists controlled the game.

Now that former India skipper Sourav Ganguly has become the president for only 10 months, time is not his friend. He has to do everything within 10 months.

He has begun on a positive note, laying out his immediate priorities as the BCCI president. He said he is focused to do something about the money the International Cricket Council (ICC) owes to the BCCI.

Mind you, the money in question is in millions, $135 million to be precise. And for the last 3 years, there has been a conflict regarding this huge sum between the ICC and BCCI. This despite the fact that around 70% of ICC’s revenue arises from the Indian subcontinent.

All this while the BCCI was too busy in its own administrative woes. The way they should have battled the ICC wasn’t done as the CoA-led body was too busy fighting the Supreme Court. Ganguly would have to find a way to force the ICC to fork out that money.

It's official – @SGanguly99 formally elected as the President of BCCI pic.twitter.com/Ln1VkCTyIW

On the cricketing front, he has said his priority is to look after the interests of the first-class cricketers. Now this is a where a lot of clarity is required.

First-class cricketers are already being paid a handsome amount. And around 80% make that grade only because they play for small teams, which have no history, no legacy, no performance. Yet they receive the same amount the top teams get.

The match fees, for one, should be performance oriented. Equating the performance of top domestic sides with the seven North-eastern states, for instance, is not a feasible idea.

The match fees should be linked to performance. If match fees is kept at Rs 3 lakh/match then players of North-east states or low-ranked sides shouldn’t get more than Rs 1.5 lakh/match.

If they are guaranteed to get lakhs, there won’t be any motivation, which will give rise to corruption. Selection, in certain states, almost involves corruption. Reports have emerged earlier that players who were ready to pay Rs 50-70 lakh were assured of game time in Ranji Trophy.

Unless the BCCI opens a vigilance committee and appoints vigilance officers tasked to nab the corrupt, these sort of nuisances will continue. As it is, we already have corruption in local state premier leagues. If money is increased, Ganguly must ensure that the money is based on team performance.

Those who played for the country get pension. But there are many unfortunate souls who have not represented the country. Rajinder Goel and Padmakar Shivalkar, both left-arm spinners, did not get to represent the national team as they were unfortunate to play in the era of Bishan Singh Bedi. 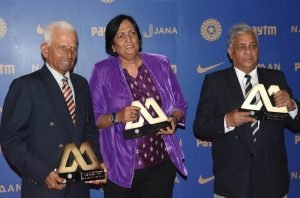 Former India cricketers Padmakar Shivalkar (from left to right), Shantha Rangaswamy and Rajinder Goel during the BCCI Annual awards in Bengaluru on March 8, 2017.

But who can deny their achievements or contributions to Indian cricket. Goel took 750 first-class victims during a 27-year domestic career and remains the highest wicket-taker in Ranji Trophy history with 637 scalps. Shivalkar played 124 first-class matches, claiming 589 wickets.

Should Goel and Shivalkar get less money than someone who has played just a handful of times for India?

Ganguly must take note of the overall performance of players for pension to be sanctioned. Bedi was a great bowler, but Goel and Shivalkar weren’t inferior to him either.

Till 1957, Ranji Trophy were played on a knock-out basis, which means the domestic season for many competent cricketers ended only after one match if their teams were knocked out early. These players, now in their 80s, are battling for survival, with not much money to bank upon.

Umpires remain the other lot who are ignored completely. One former Test umpire, now aged 91, gets Rs 20,000/-, a small amount considering his service to the game. There is no insurance for these umpires, another aspect which needs immediate attention.

Within such a short time, Ganguly may not be able to tackle each and every issue. But his man management remains superb. He and Rahul Johri, BCCI’s CEO, has to work in tandem to address these key issues.

If Ganguly could get his thinking cap on and gets the right people to do the right job then his stint would be successful.

The advantage of having a cricketer-president is that Ganguly would look at every issue from a players’ point of view, which non-cricketers don’t understand.

Cricketers bring money to the game, non-cricketers can only manage the money. It’s the cricketers who have made BCCI’s coffers swell to Rs 10,000 crore, over 20,000 if one takes into account the money owed by ICC. Not even big corporates can flaunt that kind of money.

Anshuman Gaekwad and Shantha Rangaswamy are the two former cricketers who would assess Ganguly’s performance as part of BCCI’s Apex Council. 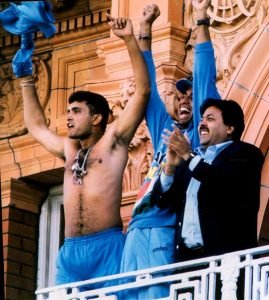 These former stars need to be on the same page to take Indian cricket forward. Every association will have a male and a female cricketer in the governing council, allowing over 70 cricketers to be involved in governance for the first time.

With cricketers now having a voting power, Ganguly would be well advised to organise a conclave or draft a circular involving office bearers of state associations to convey his vision and mission throughout every nook and corner of the country.

The visionary that Ganguly is, few would bet against him to achieve in 10 months what others haven’t achieved in their lifetime.