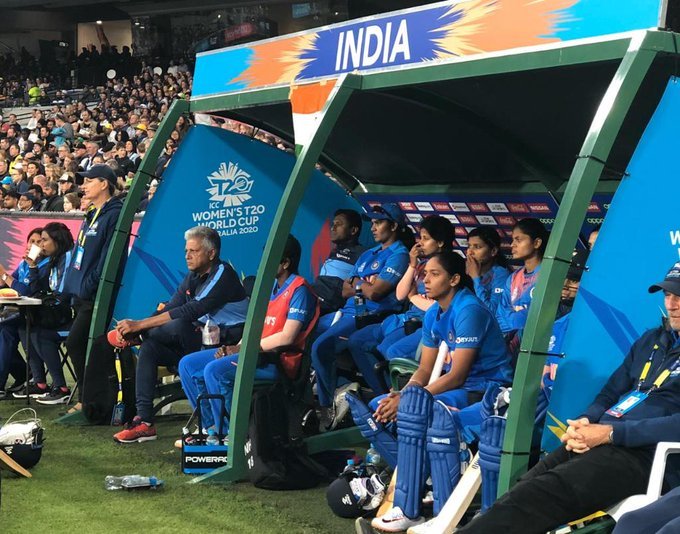 Mumbai: The much hyped women’s T20 World Cup final was a damp squib. It was supposed to be a tight affair as India had beaten Australia in their first match of the tournament comprehensively.

But the pressure of performing in front of a mammoth crowd of over 86,000 in the final at the Melbourne Cricket Ground (MCG) was too much for the young Indian women. They succumbed under external pressure.

Any match at Melbourne is always difficult for newcomers. Legends of men’s team have previously failed at the vast ground.

Whatever might be the reason, India must consider themselves lucky to reach the final.

Barring a couple of batsmen or bowlers none of the team performed. Yet, that was enough for Indian to reach the final. There was no performance of note from Smriti Mandhana or Jemimah Rodrigues or skipper Harmanpreet Kaur.

If a team’s three top batswomen keep failing match after match, the team is bound to come under pressure in big games.

Shafali Verma, all of 16, did much better that anyone could have hoped for. She hardly had any exposure to international cricket. She was allowed to play her natural aggressive game. Nobody interfered with her thought process or style, allowing her to have a successful tournament.

Never be let down. You have been amazing throughout and you'll shall have the trophy at your hand one day. Keep believing! @BCCIWomen https://t.co/q7FE5gwhDF

In the final, the game slipped from India’s grasp when they grassed two catches of the Aussie openers. Alyssa Healy was dropped for 9 and she went on to score 75 while, Beth Mooney, who was dropped on 8, ended with an unbeaten 79.

Australia went to set a big total of 184 runs, courtesy of a 115-run stand between their openers Healy and Mooney.

International cricket isn’t a place for sympathies. There are no favours given or expected here. Healy and Mooney took advantage of the powerplay and whacked the Indian bowlers.

After the thrashing, the droopy shoulders of Indian women were very evident. Having had no clue what line to bowl or how to contain the aggressive Aussie openers, they were just waiting for their 20 overs to be completed.

After being set a stiff 185-run target, what was atleast expected from the Indian batswomen was systematic planning.

Verma departed cheaply after edging to wicketkeeper Healy. Rodrigues, Mandhana and Harmanpreet were the culprit because of their horrendous shots.

It was nothing but the pressure of big scores. They thought counter-attacking is the only way to chase down the 185-run target. They forgot that to chase big scores one has to have wickets in hand. Even teams in men’s cricket adopt a similar approach.

Rather than trying to throw caution to the winds, they should have tried to build a strong platform for the latter batters to launch into big shots. But it was evident that the sense of the occasion got to the Indian batswomen despite support from an appreciative crowd.

Former India women skipper Diana Edulji has said that T20 is a weakness for Indian players. They are more suited to the 50-over ODI form of the game. In order to get accustomed to the shortest format, Indian women need to play T20s regularly.

Women cricketers have long voiced the need to start a women’s version of IPL, knowing full well that that they haven’t reached that level yet, technically and financially.

Even if the BCCI gets foreign players to play in women’s IPL type of a tournament, the Indian cricketers, barring few, are yet to achieve a decent standard.

Fitness standards, which we watched in the Women’s T20 World Cup final, is a case in point. The Aussies were clearly the fitter and more athletic of the two teams.

The home team produced an appreciable display while running between the wickets and sideways, ground fielding, pick-up and throw.

The Indians could hardly throw from the boundary line. The running between the wickets was extremely lethargic, adding to it the shoddy batting display.

If fielding and batting of a team in a match are poor, do you expect the team to win?

The time has come to suggest whether the women’s team need a strong coach, ideally a foreigner to take over the reins from here.

Irrespective of Indians remaining at the helm of the team or not, an overseas strength and conditioning coach, preferably an Australian, is the need of the hour for this team.

Skillwise, Indians are at par with the top foreign teams. We need to sharpen out fitness and be stronger to meet the physical demands of the game.

Cue could be from the men’s team, which had Indian head coaches till Kiwi John Wright took over in 2000, writing a successful new chapter in the annals of Indian cricket.

Lal’s comment was ill-timed and error of judgement: SCA curator