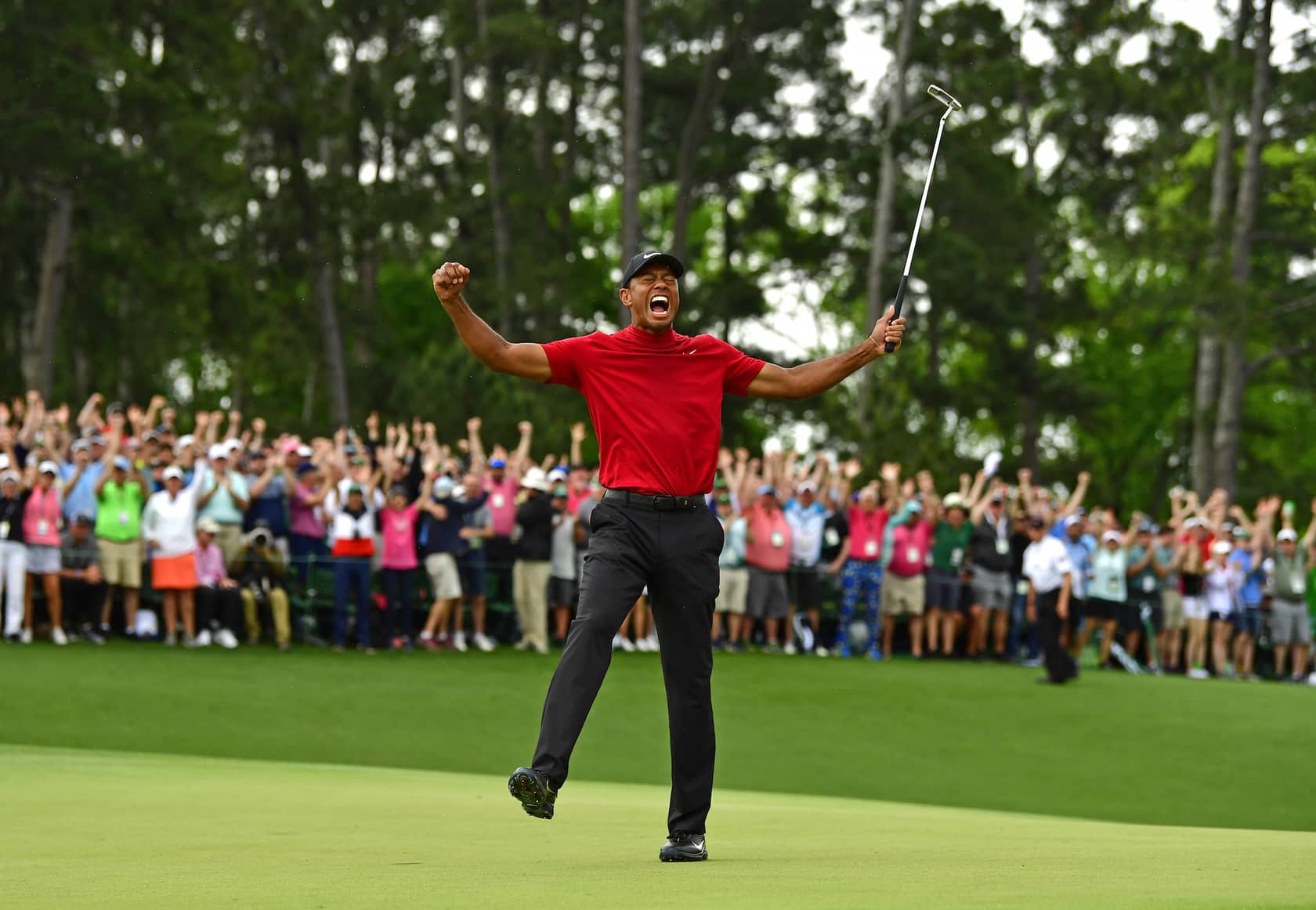 Augusta, Georgia: The world had given up hope, but Tiger Woods roared to a very special 15th Major title and a fifth Masters Green Jacket after extreme drama over the back nine of Augusta National here on Sunday.

Men rose, and men fell, before the greatest superhero of modern golf stamped his mark on the 83rd edition of the tournament with a performance that will be talked about for ages.

At 43 years, three months and 15 days, Woods became the 11th oldest player to win a Major and the second oldest to win the Masters (after Jack Nicklaus in 1986 aged 46 years two months and 23 days). It was his 81st win on the PGA Tour, first Masters victory in 14 years and his first Major since winning the 2008 U.S. Open.

In between, he had to undergo a tumultuous period when his personal life fell apart following a sex scandal and the after-effects of five surgeries on his knees and a dodgy back that seemed certain to bring his career to a pre-matured end.

Woods survived through it all and showed his critics that the Tour Championship win towards the end of last year wasn’t a flash in the pan. He is now a serious threat to young turks who have been ruling the game as he plots his attempt to rise back to the World No. 1 ranking. 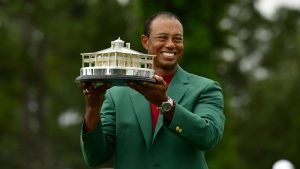 On Sunday, Woods closed with a two-under par 70 to finish on 13-under 275 for the four days, one shot better than three-time Major champion Brooks Koepka (70), the new World No. 1 Dustin Johnson (68) and the 2017 Tour Championship winner, Xander Schauffele (68).

Overnight leader Francesco Molinari (74) seemed unbreakable for most part of the front nine and had stretched his lead to two shots when Woods made his third bogey of the day on the 10th hole.

But the Italian hit his tee shot on the par-3 12th in the water and then caught a tree branch and ended up wet again with his third shot on par-5 15th hole. He made double bogeys on both the holes.

It suddenly became an open race and new names kept cropping up on top of the leaderboard virtually every minute for the next period of 20 minutes.

The most unlikely of them was American Patrick Cantlay (68), who barely made the cut at +2 after the second round. But a 64 on Day Three helped him climb up the leaderboard and he made it all the way to the top when an eagle on the 15th hole took him to 12-under par. However, he could not maintain that position and bogeys on the 16th and 17th saw him finish tied ninth at 278.

The wonderfully named and talented Xander Schauffele was the next to move to the top, courtesy back-to-back birdies on the 13th and 14th, but he stayed at 12-under after parring his last four holes.

And then there was Johnson. Under the radar for most part of the final day, the long-hitting American birdied four holes from the 13th to 17th and moved to -12. However, he could not make a birdie on the 18th to force the issue, but will regain his World No. 1 ranking. 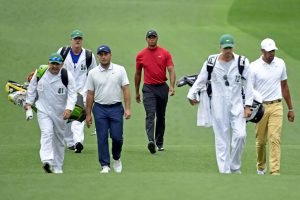 L-R: The leader group consisting of Italy’s Francesco Molinari, Tiger Woods and Tony Finau of USA during the final round of the 83rd Masters on Sunday. Photo: Twitter @themasters

Koepka, who was right in the mix at 11-under par after 11 holes, hit his tee shot into the water on the par-3 12th for a double bogey. Even though he made up with an eagle on Hole 13, his crucial birdie attempt on the 18th hole from 12 feet just slipped past and that gave Woods the leeway he needed to close the tournament.

It was not smooth sailing for the former World No. 1, who made back-to-back bogeys on the fourth and fifth holes after a birdie on the third. “I don’t think I can tell you guys what I was telling myself at that point,” he later said.

But the remarkable thing about Woods was his composure throughout the round. Despite the bogeys, he kept his calm and patience. Even though stuck at par for the round when the drama unfolded around him on the Hole 12, he then went on to birdie the 13th, 15th and 16th to claim a two-shot lead going into the last two holes.

After a regulation par on the 17th, Woods hit a great tee shot on the final hole, but there was some more suspense left. His ball collected enough mud and could not reach the green in two. But Woods chipped and then made two putts for a bogey which was enough to secure a one-shot win. He let out a mighty roar and then walked off the golf course and into the arms of his mother Kultida, and kids Sam and Charlie.

“It’s just unreal, to be honest with you. The whole tournament has meant so much to me over the years.  Coming here in ’95 for the first time, and being able to play as an amateur; winning in  ’97, and then come full circle, 22 years later, to be able to do it again, and just the way it all transpired today,” said Woods, who is expected to climb to No. 6 in the new World Rankings.

“There were so many different scenarios that could have transpired on that back nine. There were so many guys that had a chance to win. Leaderboard was absolutely packed and everyone was playing well. You couldn’t have had more drama than we all had out there, and now I know why I’m balding,” he added amidst laughter in the press conference.

Woods said one of the main reasons he felt that calm out on the golf course was because he knew he had prepared well for the tournament.

“I just felt so prepared coming into this event.  This year, my finishes don’t really reflect it, but I was starting to shape the golf ball the way that I know I can, which I needed for this week,” said Woods.

“Prep for the Masters starts six months ago, so just trying to make sure I get ready to peak for this one week, and I did, and everything came together. I kept doing all the little things correctly. Missed the ball in the correct spots time and if I was out of position, so be it, take my bogey and move on. I had no doubles this week. I just kept plodding along.”

Molinari, aiming to add to his Open Champions title in 2018, said: “I think I must have won a few fans out there with the two double bogeys.”

As for the relieved, but tired, Woods, he said he is now fired up for some more wins but the only promise he made was: “I can promise you one thing, I’m not going to hit a golf ball tomorrow.”

Nadal is favourite on any clay court, says Djokovic