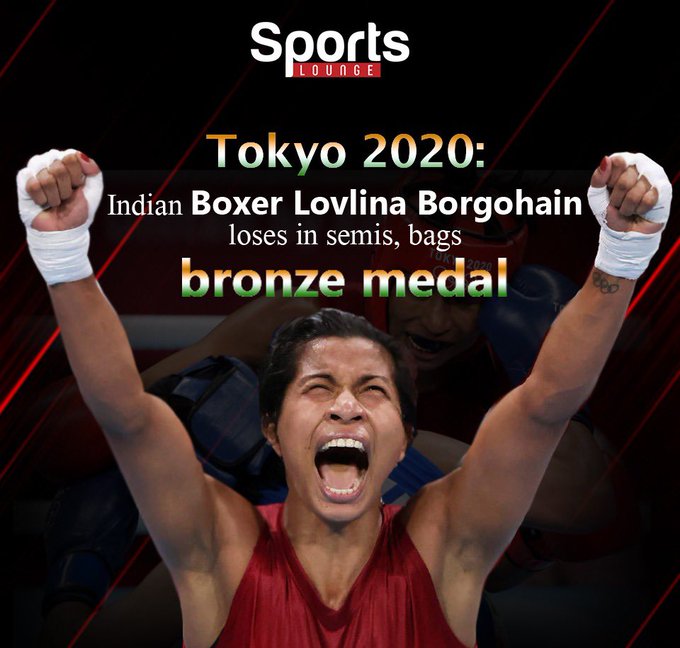 Tokyo: Indian boxer Lovlina Borgohain (69kg) signed off with a bronze medal in her debut Olympic Games after a comprehensive 0-5 loss to reigning world champion Busenaz Surmeneli here on Wednesday, bringing an end to the country’s campaign in the sport here.

Up against quite literally a bully in the ring, Borgohain was completely out-punched by the gold medal favourite Turkish boxer, who produced a thoroughly dominating performance.

Borgohain, who hails from Assam, also coped a one-point deduction in the second round for not paying attention to the referee’s instructions despite a couple of cautions.

“I don’t know what to say. I could not execute what I had planned. I could have done better,” Borgohain told PTI after the loss.

The Indian’s start was not all that bad as she stood up to the strong challenge but she came undone after Surmeneli got down to connecting her vicious hooks and body shots.

The third round was especially punishing for Borgohain, who faced two standing eight counts during the bout.

Surmeneli was unrelenting in all three rounds after being unsettled only slightly in the opening few seconds when Borgohain tried to keep her at long range and struck only counter-attacking straight hits.

The flamboyant Turkish boxer didn’t just out-punch her rival after that but also taunted her with some showboating, including dropping her guard to dare the Indian.

Nonetheless, Borgohain goes home a history-maker as the 23-year-old, who started her career as a Muay Thai practitioner, has become only the third Indian boxer to ensure a podium finish at the showpiece after Vijender Singh (2008) and M C Mary Kom (2012).

Hers is also the first Olympic medal in Indian boxing in nine years.

Surmeneli is also 23 and has collected two gold medals this year internationally.

The former middle-weight (75kg) boxer claims to have promised an Olympic medal to Turkish President Recep Tayyip Erdogan back in 2015 itself.

The Indian men’s campaign had ended in the quarterfinal stage after Satish Kumar (+91kg) went down to world champion Bakohodir Jalolov.

The other four male boxers bowed out after opening-round defeats.