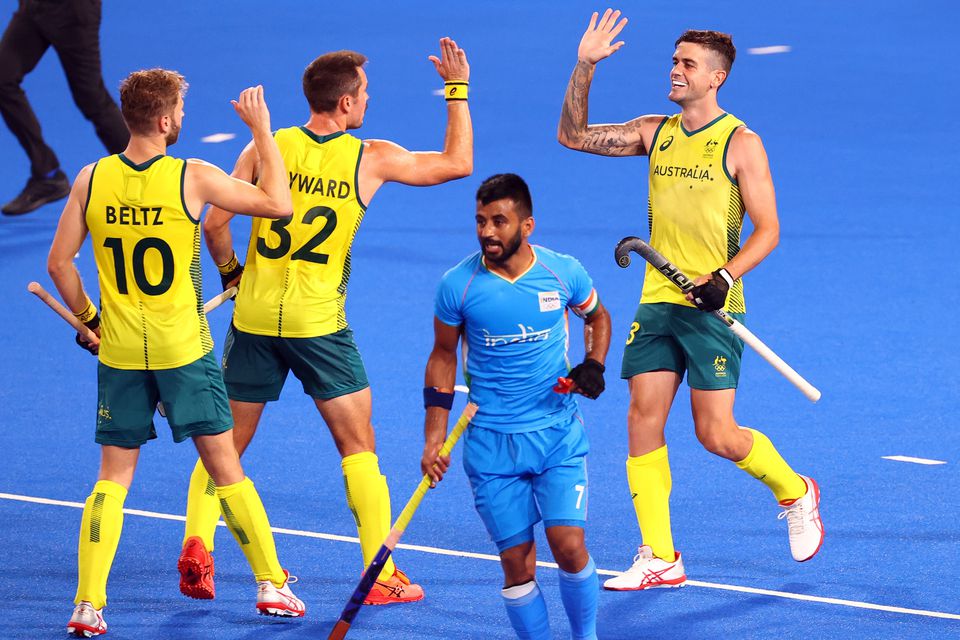 Tokyo: Australia secured a crushing 7-1 victory over India in the men’s hockey tournament on Sunday, while Germany handed Britain their first Olympics loss in women’s hockey since the London Games.

The men’s European champions the Netherlands booked a hard-fought win against South Africa, conceding three goals in the first 20 minutes before turning the game around and winning 5-3.

“I’m happy that we could show that we are able to fight back,” said forward Mirco Pruijser, who boosted the Dutch team’s morale by scoring a powerful backhand.

After Daniel Beale scored Australia’s first goal in the 13th minute, the Kookaburras were in no danger against India, completing their second group victory.

“We haven’t had a lot of international competition in the last 18 months,” said midfielder Flynn Ogilvie, who also scored for Australia.

“To come out against a quality team like India and put that performance is really giving us some confidence for the rest of the tournament.”

Earlier on Sunday, the women’s teams of Germany and Britain took a knee before the morning match got underway in Tokyo’s sauna-like summer conditions.

Germany pulled level in the 24th minute when Viktoria Huse scored her 10th international goal with a penalty stroke, and Charlotte Stapenhorst scored the winner for the Rio bronze medallists shortly after halftime.

“It’s a nice feeling to start with a win especially against the gold medallist,” Huse said.

“We know them quite well so it was a very tough game with us lucky at the end.”

Britain’s captain, Hollie Pearne-Webb, praised her team’s positive start, despite losing their first Olympic match since the semi-finals at London 2012.

“We all know that we’re still in this. Game one is out of the way and it’s a marathon, not a sprint,” she said.

Officials doubled the usual two-minute breaks between quarters in the morning games to allow players to cope with the heat at the unshaded main pitch of the Oi Hockey Stadium.

The pitch was also sprayed with water during the longer half-time break to keep play fast and smooth.

Elsewhere in the women’s competition, New Zealand defeated Argentina 3-0 in Pool B.

“There’s some fantastic defence and fantastic players that we have, but winning one game doesn’t win you a gold medal. It’s a long road there.”

In other Pool B matches, China beat hosts Japan 4-3 and Australia also won their first match of the tournament, overcoming Spain 3-1.