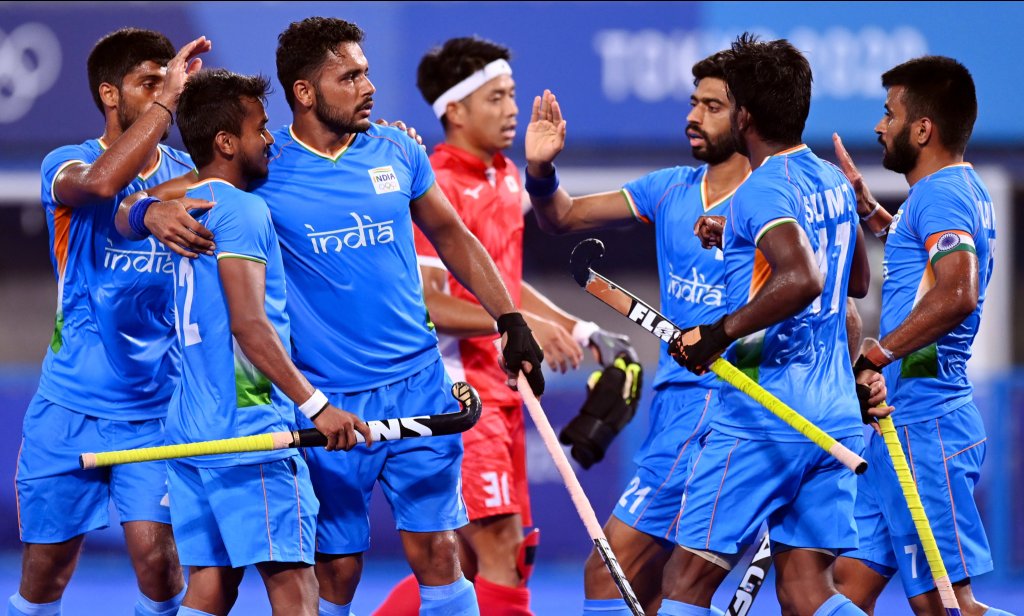 Tokyo: Striker Gurjant Singh was twice on target as India comfortably outclassed hosts Japan 5-3 on Friday to complete their pool proceedings with four victories after having already sealed a quarter-final berth in the ongoing Olympics.

Kenta Tanaka (19th), Kota Watanabe (33rd) and Kazuma Murata (59th) were the goal getters for Japan, who were already knocked out of the last-eight race ahead of Friday’s tie.

By virtue of this win, India finished second in Pool A behind Australia with four victories out of five matches.
The Kookaburras ended their pool engagements on top with four wins and a draw.

India’s lone defeat — a 1-7 drubbing — came at the hands of Australia.

The top four teams from each pool of six qualify for the quarter-finals.

Looking to keep their winning run intact, the Indians went on the offensive from the beginning and penetrated the Japanese attacking third on several occasions.

Despite exerting continuous pressure on the Japanese defence, the Indians couldn’t manage a clear shot at the goal in the first 10 minutes of the match.

In fact, it was Japan who had the first scoring chance but Tanaka’s shot just went wide.

Soon India secured their first penalty corner and Harmanpreet made no mistake in giving his side the lead.
Simranjeet Singh and Gurjant had a good match upfront as they combined well but the latter’s effort from close range was kept away by Japan goalkeeper Koji Yamasaki.

India doubled their lead two minutes into the second quarter when Simranjeet and Gurjant again combined well to create the opportunity.

It was Simranjeet who created the move. Although his initial shot was saved by Yamasaki, he got the ball again in front of his stick and did enough to pass it on to Gurjant who tapped it in from close range to double India’s lead.

But two minutes later, Japan pulled a goal back, courtesy a defensive lapse from veteran Birender Lakra, who failed to control a pass and the ball in front of Tanaka, who managed to dodge the defender and slot the ball in with a powerful shot past India custodian PR Sreejesh.

While India dominated the proceedings in terms of possession and circle penetration, the nippy Japanese caught India off guard with a counter attack just three minutes after the change of ends and Watanabe scored to restore parity.

But Japan’s joy was shortlived as India restored their lead just a minute later when Shamsher deflected in Nilakanta’s pass.

India secured their second penalty corner in the third quarter but Harmanpreet failed to execute the chance this time.

Minutes into the fourth quarter, Lalit Upadhyay was denied by an alert Japan goalkeeper Yamasaki.

India extended their lead soon when Harmanpreet found Surender Kumar on the left flank with an inch perfect aerial ball and Nilakanta was at the right place at the right time to deflect in the defender’s cross.

India secured another penalty corner soon but Japan defence was up to the mark to deny Harmanpreet again.

Japan then earned their first penalty corner of the match but Takashi Yoshikawa failed to get past Sreejesh in front of the Indian goal.

India made the scoreline 5-2 when Gurjant scored from a variation from his side’s fourth penalty corner.

Another defensive error allowed Japan to reduce the margin just a minute from the final hooter through Murata.

Tokyo Olympics: Archer Deepika Kumari out of Games after losing to An San in quarter-finals