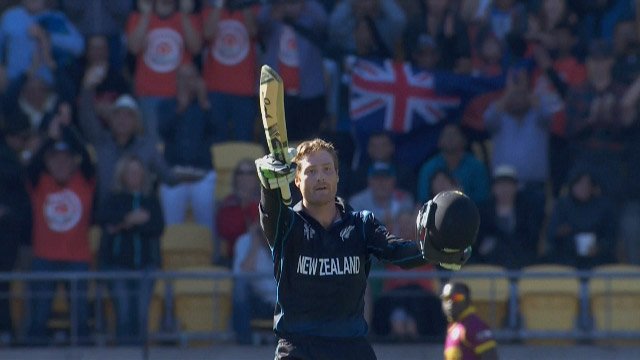 Martin Guptill holds the record for the highest individual score in a World Cup match.

When you get set, make the most of it is an age-old mantra for batsmen the world over. During the 2019 ICC Cricket World Cup  batsmen will be in heavy demand to make the most of new rules, two new balls, free hits and countless other modifications the modern game has seen in recent years.

Some batsmen in the past, however, didn’t quite need those factors, and went on to score some of the biggest hundreds in World Cup history. Sports Lounge takes a look at the highest individual scores in the Cricket World Cup thus far:

1. Martin Guptill 237* vs West Indies, 2015
The 2015 ICC Cricket World Cup finally saw two batsmen breaching the double century mark in the game’s showpiece event, which had earlier been achieved on a few occasions, but only in bilateral series.

And a World Cup quarter-final was the best place for Martin Guptill to post the highest individual score in a World Cup match, when he tore the West Indies bowling attack to shreds.

The double hundred landmark was reached earlier in the tournament, but Guptill powered New Zealand to a monstrous 393 for 6 in their 50 overs, one of their many fine performances on their way to a maiden World Cup final appearance.

Guptill took his time earlier, but once set, peppered the boundary frequently, and brutally. His 163-ball unbeaten 237 contained 24 fours and 11 sixes, and bossed the New Zealand innings in which Ross Taylor went at a leisurely strike rate of 69 from the other end. 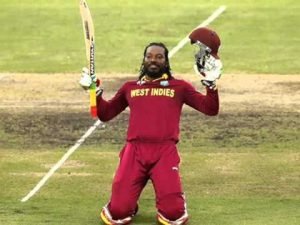 2. Chris Gayle 215 vs Zimbabwe, 2015
Almost a month before Guptill eclipsed the highest individual score landmark in the same tournament, West Indies batsman Chris Gayle had claimed another first against his name, scoring the World Cup’s first ever double century in a league game against Zimbabwe.

West Indies were rocked on the second ball of their innings when Dwayne Smith fell for a duck, but the side didn’t lose another wicket until the final ball of the 50thover, when Gayle finally perished for a 147-ball 215.

The big Jamaican hit 10 boundaries and 16 sixes in his innings; the number of sixes no surprising given his liking for the big hit.

Marlon Samuels went at a strike rate of 85 from the other end for his unbeaten century, but it didn’t bother Gayle as West Indies posted a mammoth 372.

The classy left-hander announced himself to the world of international cricket with a typically elegant 188* from 159 balls that included 13 fours and four sixes, the number of boundaries decidedly lower than those of his modern counterparts. 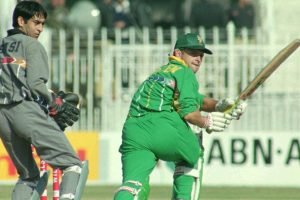 Despite that, South Africa posted a strong 321 for 2 with Kirsten carrying his bat against the United Arab Emirates, who were making their debut in the World Cup.

That debut turned worse soon after as their captain Sultan Zarawani, wearing a sun hat against Allan Donald, was struck on the head by a vicious bouncer in the same game, and somehow stole the thunder from Kirsten’s fine innings.

4. Sourav Ganguly 183 vs Sri Lanka, 1999
He was yet to become the firebrand captain who an entire nation came to embrace, but before that, Sourav Ganguly had been making news with his sensational batting in both formats of the game, especially in England where he had made his Test debut with two consecutive hundreds.

Back in the country for the World Cup, Ganguly announced himself on the grandest stage by smashing Sri Lanka’s bowlers to all corners of Taunton, Muttiah Muralitharan included. 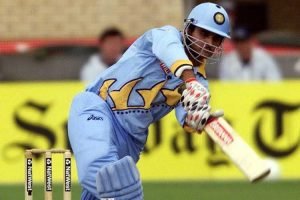 The demons of Kolkata 1996 were somewhat exorcised as Ganguly and Rahul Dravid added 318 runs for the second wicket, Ganguly doing the lion’s share of damage with a 158-ball 183.

Seventeen exquisitely timed fours and seven sixes were hit by the left-hander alone as Chaminda Vaas and co. all disappeared, but Ganguly perished in a bid for quick runs on the penultimate ball of the innings as India posted 373 for 6, and won by 157 runs.

5. Viv Richards 181 vs Sri Lanka, 1987
The legendary West Indies batsman already had the distinction of being Man of the Match in a World Cup final eight years ago, and was stopped by an unlikely Indian team in the 1983 final, but Viv Richards was in his typically destructive mood four years later in Karachi, where he smoked 181 off 125 balls with 16 fours and seven sixes in the Reliance World Cup.

Two quick wickets didn’t stop Richards from playing his natural game, and in the company of Desmond Haynes who also scored a hundred, West Indies reached a mammoth 360 for 4 after their 50 overs.

Richards’ innings remained the highest individual score in a World Cup until 1996, when Gary Kirsten toppled the West Indies legend from his perch. 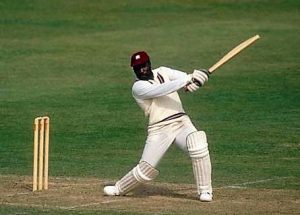 Viv Richards’ innings remained the highest individual score in a World Cup until 1996.

A sports romantic, Tanmoy sacrificed many an important school exam to consume every possible event back in the day, including Brian Lara's epic 153* over a maths exam the next morning. Loves sports, travelling and photography. In that order.