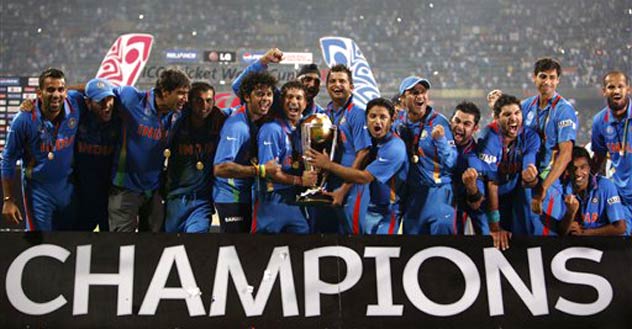 New Delhi: It was a tournament which was billed as Sachin Tendulkar’s World Cup. Tendulkar, in fact, became the official brand ambassador of the event (when 100 days countdown begun) by the ICC.

“We want to win it for Sachin” became the unofficial and yet prominent theme of the Indian team and to a greater extent for whole of the nation.

Not surprisingly, Virat Kohli touched the chord of the nation when he said after the title triumph that “Tendulkar has carried the burden of the nation for 21 years. It is time we carried him on our shoulders.” It was the enduring image of the Cup.

Like Australia in 2003 and 2007, India was pre-tournament favourites among the experts and fans in equal measure and in the end were the worthy winners. Indian captain Mahendra Singh Dhoni hitting the winning six is the most vivid image of the final. 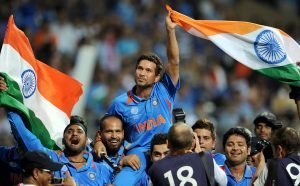 Sachin Tendulkar won the coveted tournament for the one and only time in 2011.

Format – The widely criticiseed format of 2007 was discarded by the ICC and it was back to 2 groups and straightway quarterfinals as knock out games.
Pool A: Australia, Pakistan, New Zealand, Sri Lanka, Zimbabwe, Canada, Kenya
Pool B: India, South Africa, England, West Indies, Bangladesh, Ireland and Netherlands.

Most interesting match – The most captivating match of the tournament was the one in which there was no winner or loser! The group match between India and England at Bangalore’s Chinnaswamy stadium eventually resulted in tie and that was perhaps the fair result.

There was a Tendulkar hundred in the first innings along with the fifties by Yuvraj and Gambhir and even though India put a formidable 338, they couldn’t bat full 50 overs as Tim Bresnan got a fiver.

Buoyed by an inspirational 158 from Skipper Andrew Strauss, England almost made a mockery of India’s challenge when they just needed 59 runs off last 48 balls with 8 wickets in hand. Even if India conceded 28 runs in the last 2 overs, England was still unable to score winning run.

An unforgettable hundred – It was the fastest hundred in the history of World Cup. In fact, there have been just seven hundreds in the history of ODI cricket which were made in less than 50 balls, a feat Ireland’s Kevin O’ Brien achieved on the biggest stage of cricket.

England set a target (328 to win) that was never chased in the history of the World Cup. O’ Brien’s monumental effort (113 off just 63 balls) resulted in a 3 wicket win for Ireland and that ton is rated as one of the best ever in World Cup. 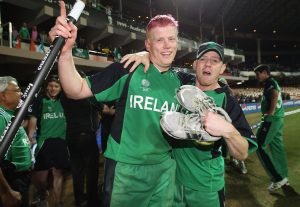 Kevin O’Brien hit the fast century of the World Cup.

Most successful batsman – Sri Lanka’s Tilakaratne Dilshan was the only batsman to touch 500 runs mark in this tournament.

Dilshan made exactly 500 runs in 9 matches at an average of 62.50 and at a strike rate of 90.74 with 2 hundreds and equal number of fifty in the tournament. Significantly for India, there were four batsmen from the champion side in the top 10 leading run scorers of the tournament.

Most accomplished bowler – Pakistan’s Shahid Afridi had a better average (12.85), a superior economy rate (3.62) and even a slightly finer strike rate (21.2) than the joint leading wicket taker of India’s Zaheer Khan who too took 21 wickets in 9 matches at an average of 18.76.

Arrival of a genius – In February 2009, exactly two years before the World Cup, nobody could forecast that Virat Kohli could be the part of the same batting unit which was arguably India’s greatest ODI batting line up. Yet, Kohli was determined to play in the mega event along with his idol Tendulkar.

With seven fifties and 3 hundreds in 2010, Kohli forcibly (by sheer volumes of runs and remarkably sustained hunger for runs) ensured that he would be part of the Indian team. In the very first match of the tournament against Bangladesh, Kohli scored a scintillating hundred. Kohli truly launched himself as an international class in this world cup where he scored 282 runs. 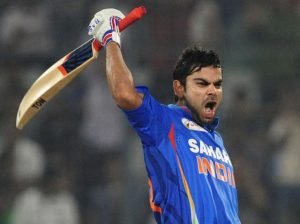 There was also the provision for a Super over from the knock out stage. However, super over was never used in this edition as the only tie match of the 2011 World Cup happened in the group stage (India vs. England in Bangalore).

Startling fact of the tournament – Ryan ten Doeschate of the Netherlands scored as many hundreds as Sachin Tendulkar, Mahela Jayawardene, and Dilshan. However, Doeschate played just six matches for his two tons while Tendulkar, Jayawardene and Dilshan got two tons in 9 matches.

Do you know? The now-disgraced India pacer S.Sreesanth(last minute replacement for Praveen Kumar) had the worst bowling analysis from the champion team. In fact, Sreesanth failed to take a single wicket after playing two matches and bowling 13 overs. He also had the dubious distinction of having the 2nd worst economy rate (8.07) after Zimbabwe’s Tinashe Panyangara(8.08).

Extra cover – New Zealand had suffered an embarrassing 0-4 loss against Bangladesh in an ODI series there just before the World Cup and very few thought they could be in the semifinal or one more time!

Vimal Kumar is the author of Sachin: Cricketer Of The Century and The Cricket Fanatic’s Essential Guide. Vimal has been covering cricket and other sports for nearly two decades which includes Cricket World Cups in West Indies and Australia and the 2016 Rio Olympic