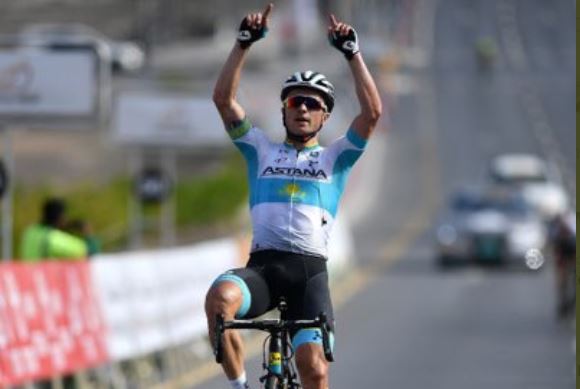 Le Teil (France): Alexey Lutsenko took the spoils on Mont Aigoual in stage 6 of the Tour de France as Adam Yates retained the yellow jersey on a day of attrition for the race favourites.

Kazakh champion Lutsenko (Astana) proved the strongest of an eight-man break during the 191km-stage to the Massif Central, kicking clear on the penultimate climb of the Col de la Lusette to take the first Tour stage win of his career.

A symbolic attack on the home straight from Julian Alaphilippe (Deceuninck-QuickStep) saw the Frenchman recoup one second over his rivals following the controversial 20-second penalty he incurred for an illegal feed on Wednesday to lose the yellow jersey.

The pack came home in Alaphilippe’s wake almost three minutes down on Lutsenko as the expected GC fireworks fizzled out on the Tour’s first ever summit finish on Mont Aigoual, the climb made famous by Tim Krabbe’s seminal novel, The Rider.

Yates survived what was Britain’s 101st day in yellow unscathed as his Mitchelton-Scott team were happy to take a back seat and let the Ineos Grenadiers of Colombia’s Egan Bernal do much of the tempo-setting during the hilly final third of the stage.

No change at the top sees Yates retain his three-second lead over Slovenia’s Primoz Roglic (Jumbo-Visma), with another Slovenian, the white jersey of Tadej Pogacar (UAE Team Emirates), in third place a further four seconds back. Frenchman Guillaume Martin (Cofidis) is fourth at nine seconds before defending champion Bernal heads a cluster of favourites at 13 seconds, with Alaphilippe staying in 16th place but now at 15 seconds from the race summit.

Ireland’s Sam Bennett put in another strong showing in the intermediate sprint to extend his lead over Peter Sagan (Bora-Hansgrohe) to 12 points, while Frenchman Benoit Cosnefroy (Ag2R-La Mondiale) retained the polka dot jersey.

“It’s probably the most important victory of my life. The Tour de France is the most important cycling event every year so it makes me really, really happy. It went just about as well as it could’ve done. I’ve been working really hard to get this stage victory. It was a stage we targeted and I’m delighted it all came to fruition because all of my efforts paid off and obviously that’s brilliant,” Lutsenko said.