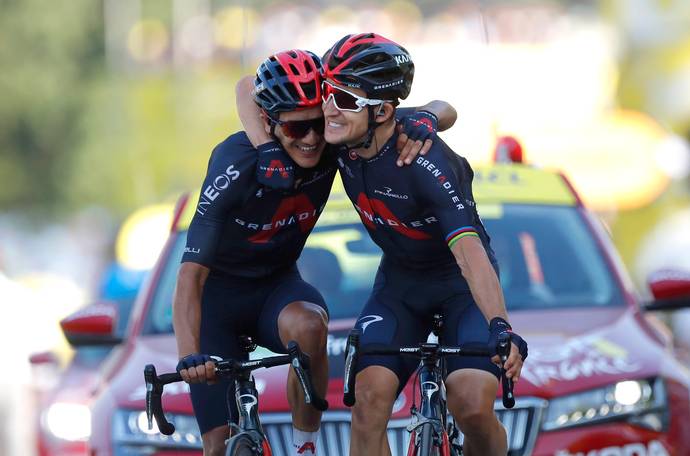 Paris: An emotional finish to Stage 18 in the Alps saw Poland’s Michal Kwiatkowski and Richard Carapaz finish arm-in-arm to lead home an Ineos Grenadiers one-two with the Ecuadorian also securing the polka dot jersey on a day to remember for the British-based team at the ongoing Tour de France.

After days of trying to bounce back from the shock withdrawal of defending champion Egan Bernal, Ineos finally got their win as Kwiatkowski was gifted a maiden Grand Tour scalp by teammate Carapaz in La Roche-sur-Foron after the pair had put on a masterclass during a gruelling third and final day in the Alps.

Kwiatkowski and Carapaz were the last riders standing from a large breakaway which formed early on in the 175km stage from Meribel, with Tour debutant Carapaz on the front of the race for the third day running.

Two days after missing out at Villard-de-Lans, Carapaz gave up his opportunity of a stage win and instead settled for the polka dot jersey, which he snatched from Slovenia’s Tadej Pogacar after a thrilling tussle with Switzerland’s Marc Hirschi (Team Sunweb) over the day’s five categorised climbs.

When Hirschi crashed on the descent of the Col des Saisies with 80km remaining, the pendulum swung in the favour of Carapaz, who led the race over the Col des Aravis and the Plateau des Glieres with teammate Kwiatkowski by his side.

The pair dropped Spain’s Pello Bilbao (Bahrain-McLaren) on the decisive climb with 35km remaining before making light work of a testing two-kilometre gravel section while holding off the chase from a group of race favourites behind.

After cresting a final uncategorised climb with three minutes in the bank, the Ineos duo were able to soak up the atmosphere as they entered La Roche-sur-Falcon and wowing the crowds with a finish reminiscent of the great LeMond and Hinault finale on Alpe d’Huez in 1986.

Belgium’s Wout van Aert won the sprint for third place and neutralised the battle for bonus seconds for his Jumbo-Visma teammate Primoz Roglic, who retained his 57-second lead over fellow Slovenian Pogacar (UAE-Team Emirates) in the general classification with two days left till Paris.

“That was some day,” said 30-year-old Kwiatkowski, the 2014 world champion and a vital cog in Team Sky and Ineos’ Tour-winning machine for the past five years. His win was Ineos’ first in Grand Tours since the second of Geraint Thomas’ back-to-back wins in the 2018 Tour, the year the Welshman won the yellow jersey.

While missing out on the chance of becoming the first Ecuadorian to win a stage on the Tour, 27-year-old Carapaz now holds a two-point lead over Pogacar in the king of the mountains classification to put a gloss on the day Ineos bounced back after the disappointment of seeing their leader withdraw.