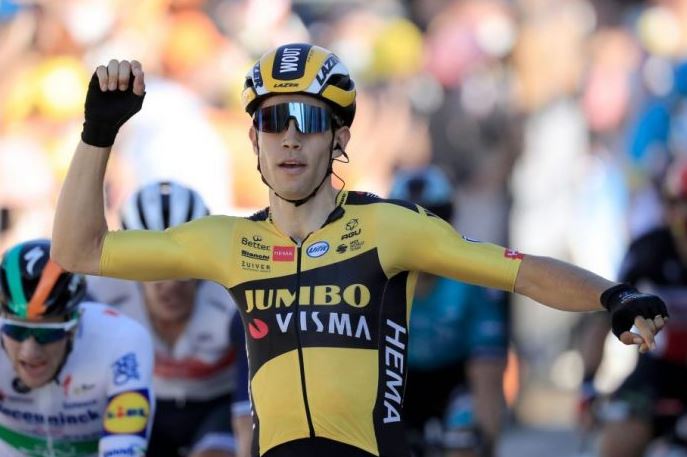 Privas (France): Wout van Aert made it two-from-two for his purring Jumbo-Visma team with victory in Stage 5 of the Tour de France at Privas as Julian Alaphilippe lost the yellow jersey in controversial circumstances to Adam Yates after incurring a time penalty for an illegal feed.

No sooner had the in-form Belgian van Aert finished celebrating his team’s second win in as many days as the race jury announced that a 20-second penalty had been imposed on Frenchman Alaphilippe for taking on an illegal water bottle from his Deceuninck-QuickStep team car with 17km remaining, contrary to the regulations.

With Alaphilippe dropping to sixteenth place in the standings, Britain’s Yates (Mitchelton-Scott) takes control of the Tour for the first time in his career. Trailing the Frenchman by four seconds in the overnight standings, Yates now leads the race by three seconds on van Aert’s Jumbo-Visma teammate Primoz Roglic of Slovenia, the Stage 4 winner.

Van Aert, the in-form Belgian, powered past Dutchman Cees Bol of Team Sunweb to win by half a wheel one day after helping to guide Roglic to victory in Tuesday’s first summit finish.

“It was a hectic finish,” van Aert said. “It was maybe the most easy stage I’ve done in a cycling race because there was no breakaway and the pace was not high. I was happy to be given the chance to go for it. And if you have one shot and you can finish it off then it’s even more sweet. I have my stage win now so from now on I will support my team even more than before.”

Ireland’s Sam Bennett (Deceuninck-QuickStep) edged Peter Sagan (Bora-Hansgrohe) for third place to wrest the green jersey off the Slovakian’s back – becoming the first Irishman since Sean Kelly 31 years ago to don the Tour’s maillot vert.

Bennett had won the intermediate sprint earlier in the stage, with Sagan only able to come fourth. He now leads Sagan by nine points as the former triple world champion faces serious opposition in his quest to win an eighth green jersey in nine years.

The Tour continues on Thursday with the 191km Stage 6 from Le Teil to Mont Aigoual. The live action can be caught on Eurosport and Eurosport HD from 03.30pm IST.