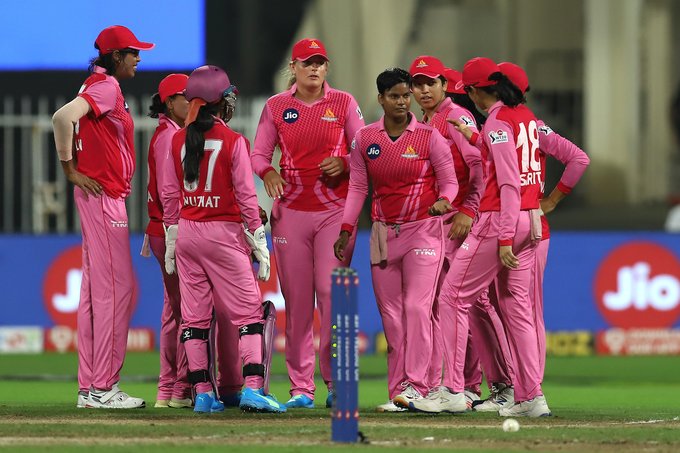 New Delhi: Velocity suffered a 16-run defeat in the Women’s T20 Challenge but still qualified for the final on the basis of a better net runrate, knocking out victors Trailblazers from the tournament on Thursday. Velocity will face Supernovas in the summit clash on Saturday.

Invited to bat, Sabbhineni Meghana and Jemimah Ridrigues smashed scintillating fifties to help the defending champions post a huge 190 for five, the highest total in the history of the tournament.
But they needed to restrict Velocity to 159 to become the second team to qualify for the final but it was not to be as Kiran Navgire had other ideas.

The 27-year-old all-rounder from Maharashtra lit up the night sky with five fours and as many sixes on way to her 34-ball 69 to take Velocity across the 150-mark and on the doorstep of the final. The Trailblazers bowlers, led by Poonam Yadav (2/33) and Rajeshwari Gayakwad (2/44), eventually managed to restrict Velocity to 174 for nine to also open their account but they would rue their heavy 49-run defeat to Supernovas in the opening match.

Trailblazers (-0.825), Supernovas (+0.912) and Velocity (-0.022) ended with two points each but the top two teams made it to the final as they had better net runrate than the defending champions. Velocity crossed the 159-run mark in the 19th over to make it through to the final. Set a stiff target of 191 to win, Navgire, playing her first season in the big league, showed steely temperament as she anchored the chase beautifully, adding 55 off 31 balls with Laura Wolvaardt (17) and then held on to the other end.

Navgire and Wolvaardt’s partnership helped Velocity pile up the fastest team hundred of the tournament.
Velocity kept losing wickets under scoreboard pressure but Navgire steered them to safety before being stumped by Richa Ghosh off Shopie Dunkley in the 17th over.

Once Navgire departed, it was all over for Velocity. Earlier, Meghana knocked the stuffing out of Velocity attack with a 73 off 47 balls en route to a 113-run partnership off 73 balls with Rodrigues (66 off 44 balls) as Trailblazers posted 190 for five, the highest total in the history of the tournament.

Meghana took the responsibility to steer the team after Trailblazers lost skipper Smriti Mandhana (1) early.
Meghana, who was dropped at 16 and 63, displayed her big-hitting skills, clobbering seven fours and four maximums. Rodrigues too had seven hits to the fence and one six in her 44-ball innings.

Velocity was extremely sloppy on the field as their butterfingered fielders dropped as many as four catches — two in Simran Bahadur’s over. Meghana produced two good hits down the ground off Kate Cross but the bowler returned to dismiss Mandhana with Simran taking an easy catch.

Cross could have added Meghana’s wicket to her list but Sneh Rana dropped her at the point. Rodrigues then slammed two fours off Deepti Sharma as Trailblazers scored 47 for 1 in the powerplay. Meghana took apart the attack, dispatching Radha Yadav for two sixes — one an inside out shot over covers and the second one over the bowler’s head — en route to her fifty in the 10th over.

Rodrigues too played some exquisite shots and reached her fifty in the 14th over off 30 balls. Shafali Verma and Ayabonga Khaka bowled two decent overs but Meghana broke the shackles, launching Verma over long off for her third six. Meghana got another reprieve when Khaka dropped her at backward point and she slammed a six and four off Rana before Cross held on to one at long-off to finally get rid off the opener.

Rodrigues and Matthews added another 31 off 15 balls before the former was holed out to Khaka. Hayley Matthews (27 off 15) and Sophia Dunkley (19 off 8) then provided the late flourish.