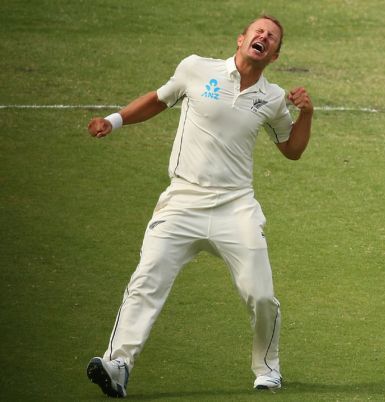 Auckland: New Zealand pace bowler Neil Wagner, whose variations in short-pitched deliveries will be a big challenge for India in the World Test Championship (WTC) final, said Kiwis are better prepared than they ever were before touring England thanks to their practice with the Dukes ball.

New Zealand, who play two Tests against England from June 2 to June 14 before playing the WTC final against India from June 18, used the Dukes ball at the pre-departure camp in Lincoln.

“It’s been quite nice, it’s obviously got different characteristics to the Kookaburra. The way we’ve been training for the last while is something we didn’t always have in the past, having the facilities and having a marquee up and getting a number of trainings in before going to England,” Wagner told New Zealand media reporters at the Auckland airport just before departing to England.

“On tours in the past you rock up there and you’ve only got a couple of trainings and maybe one head out with the Dukes ball before the first Test and with that you can find yourself a little bit behind,” he added.

“But having had those little bit of trainings leading into it has been quite beneficial, just because it’s a little bit different, and obviously adapting to it. It’s been really good preparation and everybody is excited bowling with it.”

Wagner is ranked third in ICC Test bowlers’ rankings behind No. 1 Pat Cummins and No. 2 R Ashwin. Tim Southee, who also will be playing the three Test matches – two against England and the WTC final vs India –, is the other Kiwi among the top 10 bowlers, at No. 6.

While one batch of the New Zealand team has already reached England, Wagner is part of the second batch that departed on Monday.

The left-arm quick said that they will not take the Tests against England as warm-up for the WTC final but will go for the in.

“We’re not going to treat these two Test matches against England just as warm-ups [for the WTC final],” he said.

“I know for a fact we’re going to get out there and pride ourselves the way we’ve been playing Test cricket and we want to win Test matches for New Zealand.”