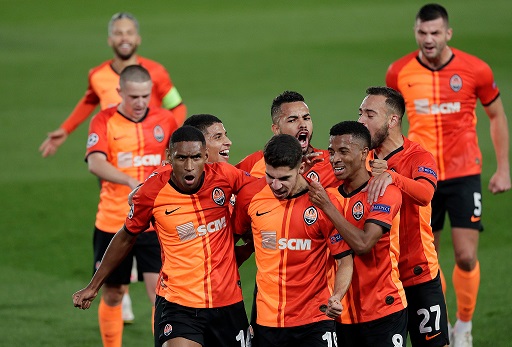 Bayern’s winning margin could have been greater but for Niklas Süle striking a post.

Shakhtar Donetsk including seven starters aged 21 or under pulled off a stunning upset against Real Madrid.

The visitors raced into a 3-0 first-half lead thanks to Tete’s composed opener, Raphaël Varane’s own goal and Manor Solomon’s finish to a fine team move.

Madrid threatened a comeback but Luka Modrić and Vinicius Junior’s goals were all they could muster.

Following a cautious first half, this contest burst into life after the interval.

Inter struck first as Romelu Lukaku found the net for the ninth European game in a row but the advantage proved brief, Arturo Vidal tripping Marcus Thuram and Ramy Bensebaini levelling from the spot.

When Jonas Hofmann raced clear to slot in with six minutes left, Mönchengladbach looked set for a famous win, only for Lukaku to score again in the 90th minute.

City continued to hold sway after the restart and were finally rewarded when İlkay Gündoğan curled in their second from a free-kick and substitute Ferrán Torres fired in a third.

Liverpool returned to winning ways in fortuitous circumstances as Nicolás Tagliafico put through his own net following Sadio Mané’s similarly miscued shot before the break.

Fabinho brilliantly cleared Dušan Tadić’s lob off the line and Davy Klaassen’s howitzer came back off the upright as Ajax piled on the pressure, but Liverpool held firm.