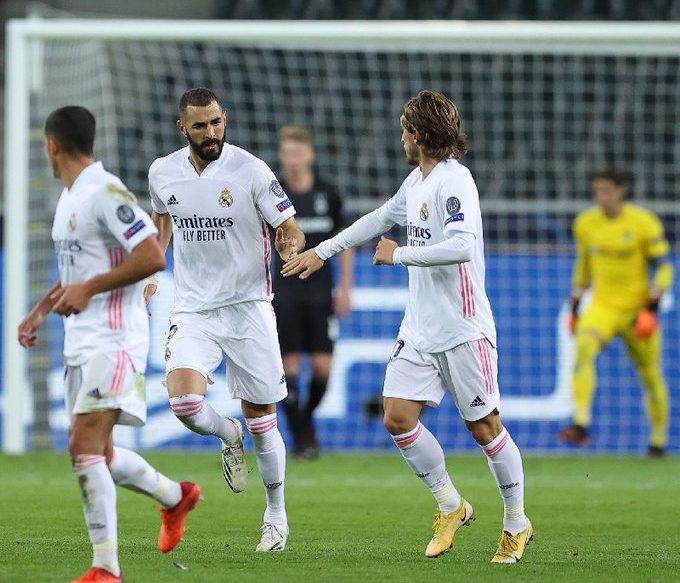 Madrid: Real Madrid staged a dramatic late comeback in Germany, while holders Bayern Munich made it 13 competition wins in a row in the Uefa Champions League.

Joshua Kimmich scored 11 minutes from time to give the holders a hard-earned 2-1 win against Lokomotiv Moskva.

Leon Goretzka’s header had secured Bayern an early lead, but the hosts offered up stubborn resistance and were briefly level again after Anton Miranchuk struck midway through the second half.

Real Madrid staged a dramatic comeback to take their first point. Marcus Thuram’s double – one from Alassane Plea’s pass and another from his parried shot – had the hosts in command until the last three minutes.

Then Karim Benzema hooked in and Casemiro converted a header across goal by Sergio Ramos to prise a draw for Zinédine Zidane’s side.

Shakhtar held a dominant Inter Milan 0-0 in Kyiv to gain a point.

Kevin De Bruyne contributed two assists in a routine 3-0 win for Manchester City over Marseille.
Ferrán Torres opened the scoring 18 minutes in, before quick-fire strikes from İlkay Gündoğan and Raheem Sterling late in the second half wrapped up three points for Josep Guardiola’s men.

João Félix left it late to net Atlético Madrid three points and stave off a spirited Salzburg in a 3-2 win.