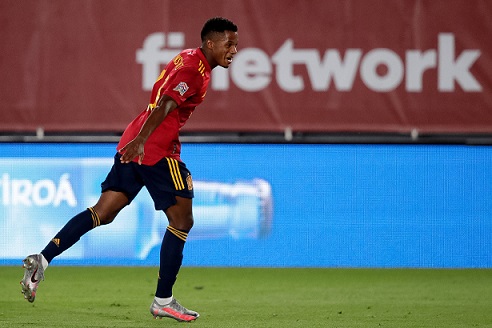 Madrid: Ansu Fati became the youngest goalscorer in the history of the Spanish national team on Sunday by scoring in Spain’s 4-0 win over Ukraine.

Aged 17 years and 311 days, Fati scored in the 32nd minute at the Alfredo di Stefano Stadium, when he cut in from the left and curled into the bottom corner.

It came after a spell-binding opening half an hour from the youngster, whose driving run had already earned a penalty for Sergio Ramos to convert.

Ramos then headed in to make it two before Fati made history on his first start for Spain, beating the country’s previous youngest scorer, Juan Errazquin, who scored three goals aged 18 against Switzerland in 1925.

Manchester City’s new signing Ferran Torres made it four late on as Spain registered their first victory in this season’s Nations League to go top of League A’s Group 4.

Luis Enrique’s side had opened with a 1-1 draw on Thursday against Germany, whose second game ended in another 1-1 draw away at Switzerland.

Fati impressed off the bench against Germany, enough to be handed his first start by Luis Enrique on the left of Spain’s front three.

He took his chance by putting on a mesmerising display, the only shame that there were no fans in the stadium to see it.

Who did it best today?#NationsLeague

“At that age it’s easy to get birds in your head,” said Luis Enrique afterwards. “But he is mature enough to know that the path he is taking is the best to take as a player. He’s quiet and humble.”

Fati is now the youngest player to score for Spain, for Barcelona in La Liga and the youngest to score in the Champions League as well.