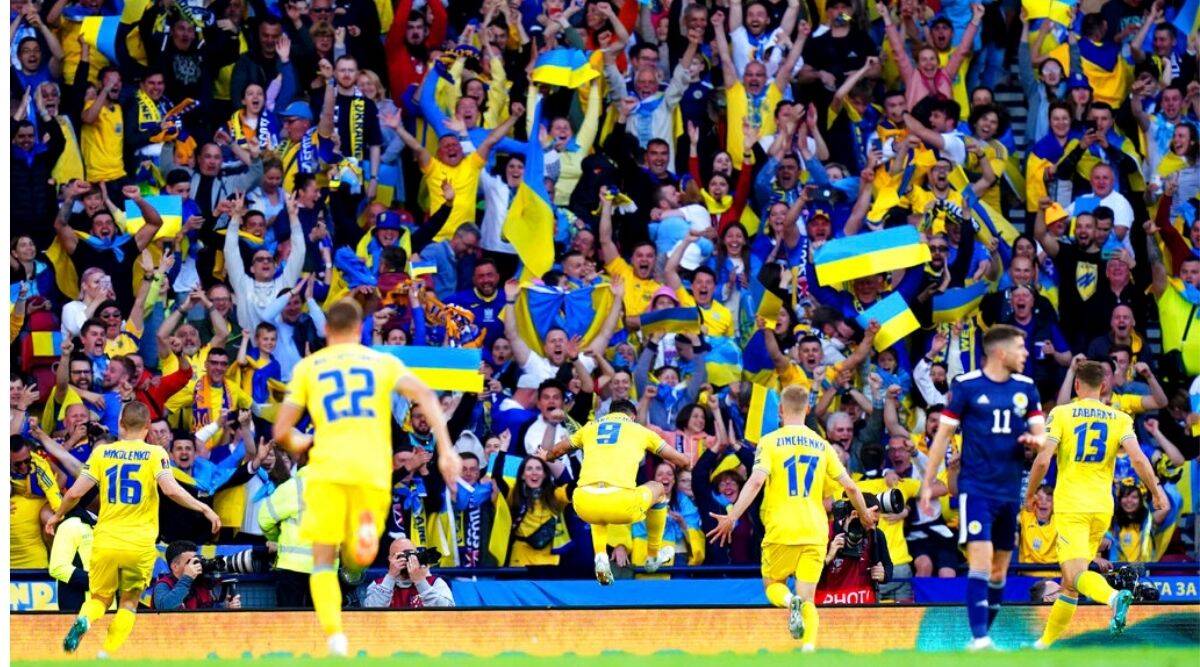 Ukraine’s emotion-filled quest to qualify for the World Cup amid an ongoing war moved past the first hurdle with a 3-1 win over Scotland on Wednesday in a pulsating playoff semifinal.

Veteran captain Andriy Yarmolenko lifted his nation by scoring a deft lobbed goal in the 33rd minute and then helped set up Roman Yaremchuk’s header in the 49th to make it 2-0.

Ukraine dominated for much of a deserved win but had to resist a Scotland revival as risk-filled attacks brought a goal in the 79th by Callum McGregor, before Ukraine substitute Artem Dovbyk broke clear to score with the last kick of the game.

Dovbyk led teammates toward the corner of the stadium to share the celebration with 3,000 Ukraine fans in the 51,000 crowd, applauding each other with hands raised high above their heads.

Ukraine coach Oleksandr Petrakov said the win was for “the armed forces in the trenches and in the hospitals, who give their last drop of blood, those in Ukraine who suffer every day.”

Now Ukraine moves on to face Wales on Sunday with a place at the World Cup at stake.

The winner in Cardiff will go to Qatar in November to play in a group against England, the United States and Iran.

Ukraine put in a slick display despite using six starters who had not played a competitive game of any kind since December.

Most of Ukraine’s squad play for home-based clubs whose league was shut down after Russia’s invasion, and the playoff in Glasgow was postponed in March. FIFA and Scotland agreed to give the Ukrainian team a fair chance to prepare for games that have become a focus of national identity and pride.

Scotland lacked the class needed and its wait for World Cup soccer now extends beyond the 24 years since it went to the 1998 tournament.

“I am suffering, the coaching staff are suffering and more than anybody the players are suffering,” Scotland coach Steve Clarke said. “The best team won the game.”

Ukraine’s win could have been sealed sooner but for saves early and often by 39-year-old Scotland goalkeeper Craig Gordon. When the Scots chased a way back into the game, John McGinn placed a 67th-minute header inexplicably wide from close range.

Ukraine is riding a wave of global goodwill as the victim of Russian aggression and its players’ intense motivation to reward the nation with a place on soccer’s biggest stage was clear.

The Ukrainian players all walked onto the field each with a blue and yellow national flag draped on their shoulders.

The warm welcome saw Ukraine’s national anthem “Shche ne vmerla Ukrainas” applauded loudly by Scotland fans. Many of those same fans stayed after the game to salute their victorious opponents off the field.

“Also I give my gratitude to the people of Scotland — an amazing, hospitable place,” Petrakov said.

Some of the Ukrainian fans had traveled far and had made plans to stay in Britain for the decisive playoff Sunday.

George Butromeyev told The Associated Press before the game he came from Toronto with friends to support the players who “need to show the people of Ukraine that we are warriors.”

“It’s not only about football,” said Yaroslav Grygorenko, who traveled from Amsterdam. “It’s important to be on the top of the discussions here in Europe, to not let (people) forget what is happening in Ukraine.”

Scotland-born Alex Demianczuk wore a kilt in Ukrainian yellow and blue colors and wanted his parents’ nation to advance. Ukraine playing at the World Cup, he said, would be “something that’s really going to get on (Russian President Vladimir) Putin’s nerves.”

In Kyiv, fans determined to get together to see the match had the war-time night-time curfew to contend with, which kicked in at 11 p.m. local time, before the start of the second half.

The Beer & Meet bar in downtown Kyiv got around the restriction on movement by offering fans the possibility to stay there until 5 a.m., when the curfew ends.

Police swung by the bar in a patrol car a few minutes before kickoff, asking fans who had gathered outside to go down into the drinking hole’s basement rooms, because of an air-raid warning.

Oleksii Safin, 40, who works as a voice actor, stood with his right hand over his heart as he belted out the national anthem. He and other supporters erupted in celebration when Ukraine scored first. But the war raging in the east of the country wasn’t forgotten.

“It looks like we are having lots of fun but, actually, we are not,” Safin said. “We are trying to look normal, as far as we can, but we still remember what is going on out in the east.

“It’s a good fight, just like the fight that we have right now with the Russians,” Safin said. “We can show that we can do it.”