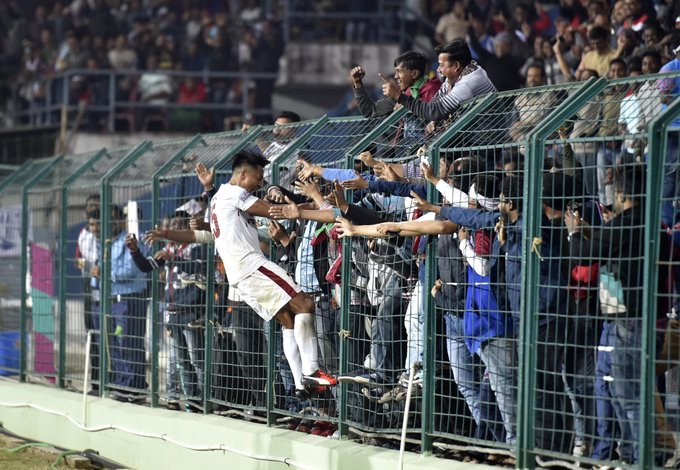 Mohun Bagan are runaway leaders in the I-League this season. Photos: @Twitter

New Delhi: It is a tale of two clubs, who tested success at their own den. In their own unique way, playing their own brand of attractive football.

One of them are already the champions in a dazzling, cash-rich franchise league. And deservingly so. The other club are all set to bag the title in a league that they clearly consider a sinking ship.

Yet, with an 11 points lead after 13 rounds, it is hard to imagine anyone else pipping Mohun Bagan in the final stretch. Once the title is in their pocket, the green and maroon will bid farewell to I-League.

FC Goa, on the other hand, have created “history”. They are the first team to book a group stage spot in prestigious Asian Champions League (ACL). Let’s not get into a debate over how an ACL berth was created. Or for whose benefit it was actually created.

In the end, FC Goa are praiseworthy winners. Even if they have to play with four foreigners (one Asian included), they could be expected to put up a decent show in ACL. They have a bunch of Indians worth a second look. Definitely.

With 14 goals in 15 matches against his name, Spanish striker Ferran Corominas is undeniably the key man. At the same time, players like Jackichand Singh, Brandon Fernandes, Seriton Fernandes, Mandar Rao Desai or Lenny Rodrigues cannot be counted out.

Their contributions were equally important. Even at times with seven Indians in the starting XI, FC Goa have done well this season.

Now, these footballers are certainly looking forward to a better tomorrow. They are set to rub shoulders with an elite group of footballers in the continent.

Back home, some are already with the national team. Others are knocking on the door. Loudly and confidently. They could break-in any day.

Let’s move over to the other side. Mohun Bagan, no doubt, are heavily dependent on foreign recruits. Their smooth sailing so far wouldn’t have been possible without Joseba Betia, Francisco Gonsalez or Papa Diawara.

But then, there are some Indian footballers, who too have contributed handsomely in Mohun Bagan’s fine run. The roles of goalkeeper Shankar Roy, defender Asutosh Mehta, midfielder SK Sahil or striker Subha Ghosh this season can’t be ignored completely.

What is in store for these footballers next season? Will they be called to the national camp? Barring Sahil, it is a highly unlikely situation for the rest. Some, in fact, may have to look for new avenues in the domestic circuit.

Mohun Bagan Football Club (India) Private Limited will cease to exist next season. The 130-year old Kolkata institution will wake up to a new dawn. In a new league, under a new name. Richer in cash, brighter in new outfits. Possible I-League champions will have a new beginning. But it is not the same for many of those who made them champions.

Mohun Bagan are likely to exit I-League with their head high. A “historic” title, they would say before embracing their wealthier partners. But many of those who made it possible may have to stare at uncertain future. There could be no room for them in the better furnished house.

Will Ghosh or Roy be welcomed with open arms when Bagan merge with a franchise? Or would they be asked to sweat it out for their B side?

Betia may move over to the western coast of India, N Naorem may rejoin his parent team in the South. The future of several other players is still unknown. That’s exactly the reward for finishing on top!

Mohun Bagan’s opting for greener pastures is being projected as a move to protect the club’s much-hyped legacy and tradition.

In reality, it is a move to save a handful. To keep their hold over the club intact. To cling on to power for many more years to come. Taking Roy, Ghosh or Abhijit Bagui to next level is not high on their agenda.

The irony of Indian football!!