UP Yodhha edge out Bengaluru Bulls in a thriller, Bengal Warriors and Telugu Titans share the spoils 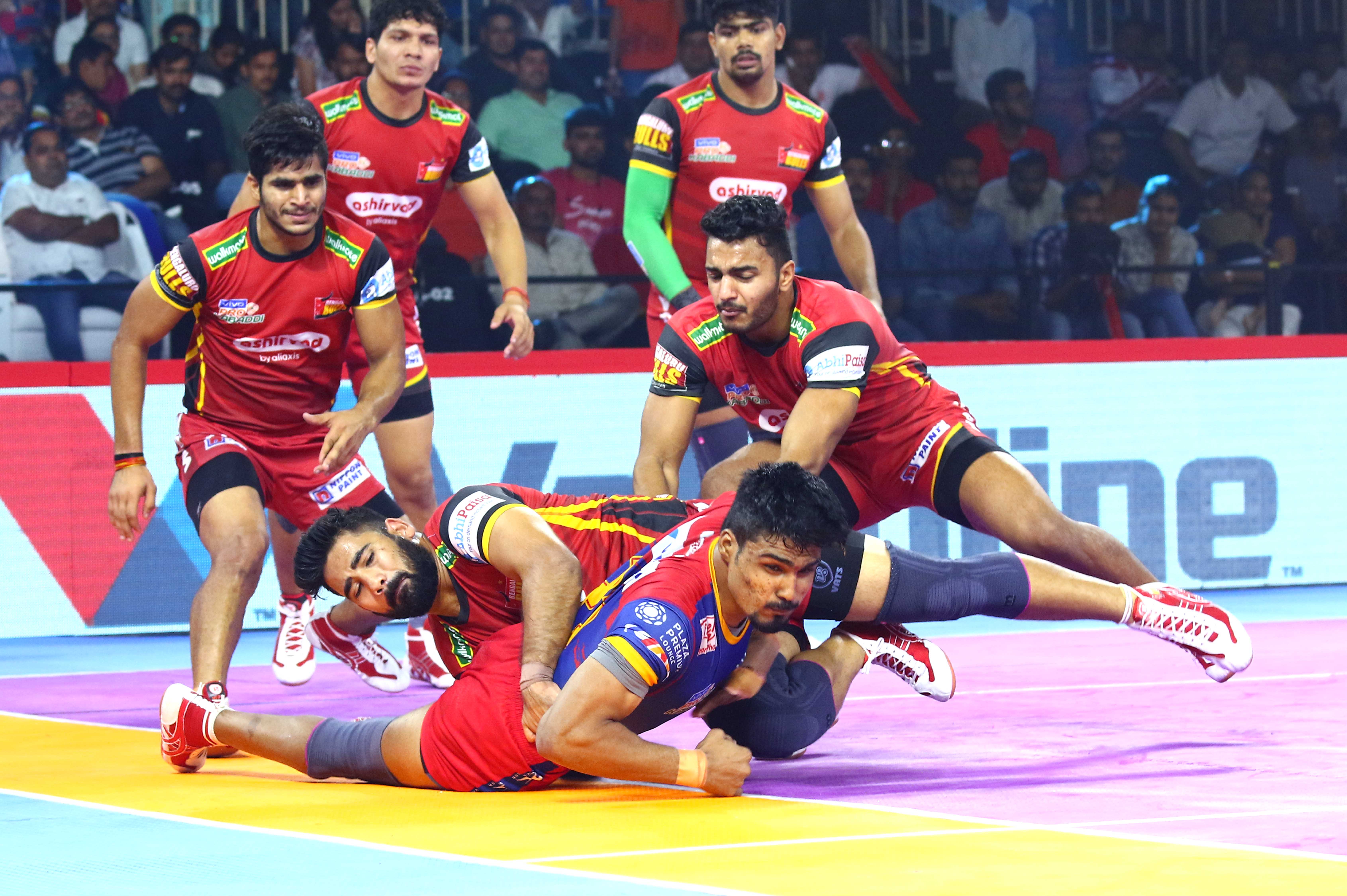 Bengaluru Bulls defense against Shrikant from UP Yoddha

Ahmedabad: UP Yoddha put in a disciplined performance against Bengaluru Bulls to secure a 35-33 victory in an edge-of-the-seat thriller here on Monday. Pawan Sehrawat put in a brilliant all-round performance for side, scoring a Super 10 and also picking up three tackle points. However, Sumit’s High 5 combined with Monu Goyat and Shrikant Jadhav’s effective raiding helped UP Yoddha stay ahead in the contest. latest sports news headlines

Bengaluru Bulls raced away to a 6-1 lead just three minutes into the match thanks to Pawan  Sehrawat, who scored five of those first six points. Monu Goyat, though, responded in style, first picking up two points through a Super Tackle and then putting in a two-point raid to bring the score difference down to just one.

The second half started slow, with both teams playing on the Do-or-Die raid. Bengaluru Bulls succeeded in the first sequence of Do-or-Die raids, getting two points but UP Yoddha proved successful in the next two as the scores remained close. Ashu Singh’s successful tackle to send Pawan to the bench was then followed by a successful Shrikant Jadhav Do-or-Die raid as U.P. Yoddha started to get in front. latest sports news headlines

Pawan then went on a spree of successful raids to reduce the deficit to four points, reaching his Super 10 in the process. His two-point raid with five minutes left in the match, followed by Sheoran’s tackle on Jadhav gave Bengaluru Bulls some momentum before UP Yoddha skipper Nitesh Kumar ensured that his team stayed ahead with two tackle points in quick succession. latest sports news headlines

Rohit made it a one-point game in the penultimate raid of the contest but Jadhav kept his nerve and scored a point against a high-line Bengaluru Bulls defence in the final raid to give U.P. Yoddha a narrow win.

Telugu Titans, courtesy of their defence and the Desai brothers  Suraj and Siddharth, got off to a strong start and took an early two-point lead in the contest. They maintained that lead till midway in the first half, but a run of unanswered points from Bengal Warriors levelled the scores at 7-7. Amit Kumar and Suraj helped Telugu Titans reduce Bengal Warriors to just three men on the mat, but a picture-perfect Thigh Hold from Mohammad Nabibakhsh on Siddharth levelled the scores yet again. latest sports news headlines

Telugu Titans Farhad Milaghardan put his team back up by one with a tackle on Maninder Singh, but Nabibakhsh showcased his all-round ability and levelled the scores with a touchpoint on Amit Kumar. In the final moments of the half, Suraj was Dashed out, but a review from Telugu Titans revealed that the raider had stepped out of bounds before getting a touch on a defender. This meant that Suraj, along with three defenders that entered the lobby, were rendered self-out and the two teams headed into the half-time break with the southerners leading 13-11.

In the final minute of the contest, Armaan came in to raid and successfully scored a bonus before being tackled by Rinku Narwal as each team earned a point and the scores remained level. Given the precarious nature of the contest, neither Maninder nor Suraj ventured too deep into the opposition half in the final two raids of the contest and the clock expired, confirming another tie between these two sides. latest sports news headlines