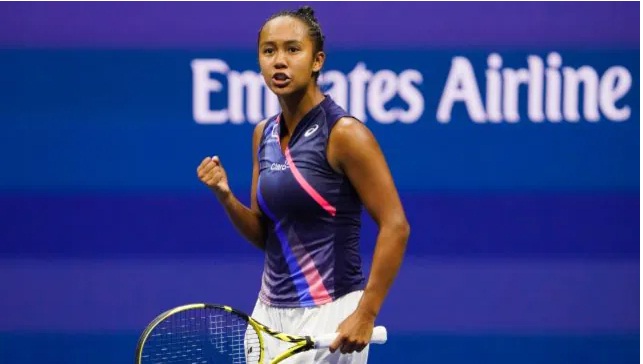 New York: Defending champion Naomi Osaka of Japan and Greek third seed Stefanos Tsitsipas were both ousted from the US Open by 18-year-olds in epic stunners on Friday at Arthur Ashe Stadium.

“Honestly the Alcaraz match gave me motivation and gave me the energy to do the same,” Fernandez said. “I saw his match and I saw the way he won and I’m like ‘I’m going to do that next now.'”

Shock followed shock as defending champion Osaka, in a tearful news conference after the loss, announced she was taking a break from playing tennis.

“I honestly don’t know when I’m going to play my next tennis match,” Osaka said, wiping away tears. “I think I’m going to take a break from playing for a while.”

Osaka, who had won her prior 16 Grand Slam matches, was foiled in a bid for her third US Open crown in four years and the first back-to-back titles since Serena Williams in 2014.

Alcaraz is the youngest man in the US Open fourth round since 17-year-old American Michael Chang in 1989 and at any Slam since Ukraine’s Andrei Medvedev in the 1992 French Open.

“Incredible. Incredible feeling for me,” Alcaraz said. “This victory means a lot to me. It’s the best match of my career, the best win.

“To beat Stefanos Tsitsipas is a dream come true and to win here is even more special for me.”

Osaka had a major meltdown on court during the final moments of the second set after she was unable to hold serve for the victory.

“From the very beginning, right before the match, I knew I was able to win,” Fernandez said. “Thanks to New York fans. They helped me get the win.”

Osaka, who hadn’t played since Monday thanks to a second-round walkover, took the first set in 37 minutes on her sixth ace.

But Osaka was broken in the 12th game of the second set, an errant forehand sending her to a tie-breaker.

That began a sequence of repeated racquet smashing by Osaka as she was humbled in the tie-break to force a third set.

“I wanted to stay on court a little longer,” Fernandez said. “One hour was just not enough for me.”

Fernandez, the daughter of an Ecuadorian father and Filipino-Canadian mother who turns 19 on Monday, hit a forehand winner to break Osaka to start the third set.

Osaka saved two break points to hold in the third game and from there both held to the finish, which came after two hours and four minutes, sending Fernandez against German 16th seed Angelique Kerber in her first Grand Slam fourth round appearance.

“It’ll be a battle,” Fernandez said. “We’re just going to have fun. I’ll put on a show like I did tonight.”

Fernandez, who won her first WTA title in March at Monterrey, had never beaten so high-ranked a rival as third-rated Osaka and the same was true for Alcaraz when he sent home the men’s world number three.

Alcaraz became the youngest man to beat a top-3 player at the US Open since the rankings began in 1973.

Alcaraz won his first ATP title at Umag in July, becoming the tour’s youngest champion since 18-year-old Kei Nishikori in 2008 at Delray Beach.

The teen nicknamed “Next Nadal” was the crowd darling at Arthur Ashe Stadium, roars erupting when he blasted 33 winners past Tsitsipas.

“Without this crowd I haven’t the possibility to win the match,” Alcaraz said. “I was down at the beginning of the fourth set so thank you to the crowd for pushing me up in the fifth.”

Tsitsipas opened the final tie-break with an ace but Alcaraz jumped ahead 5-2 and 6-3 before finishing matters after four hours and seven minutes with a forehand winner. He collapsed to the court on his back to celebrate.

“It’s one of those matches where you feel like you’re in control and it doesn’t go your way,” Tsitsipas said. “It’s kind of bitter.”

“I was playing good and really happy with my level,” Medvedev said. “The main positive was to win in three sets.”

Muguruza matched her best US Open showing from 2017 by defeating the three-time US Open runner-up in the only Slam where the Spaniard hasn’t reached the final.

“It’s a Grand Slam where I’ve been struggling,” Muguruza said. “This year it’s working so I want to keep going.”

Next up for Muguruza will be Czech eighth seed Barbora Krejcíková, the reigning French Open champion who beat Russian Kamilla Rakhimova 6-4, 6-2.

“Every match is a semi-final,” Halep said. “The level is super high.”

US Open: Swiatek, Olympic champion Bencic breeze into second round