US Open 2022, Day 12: Alcaraz beats Tiafoe in five-set thriller to set up final against Ruud 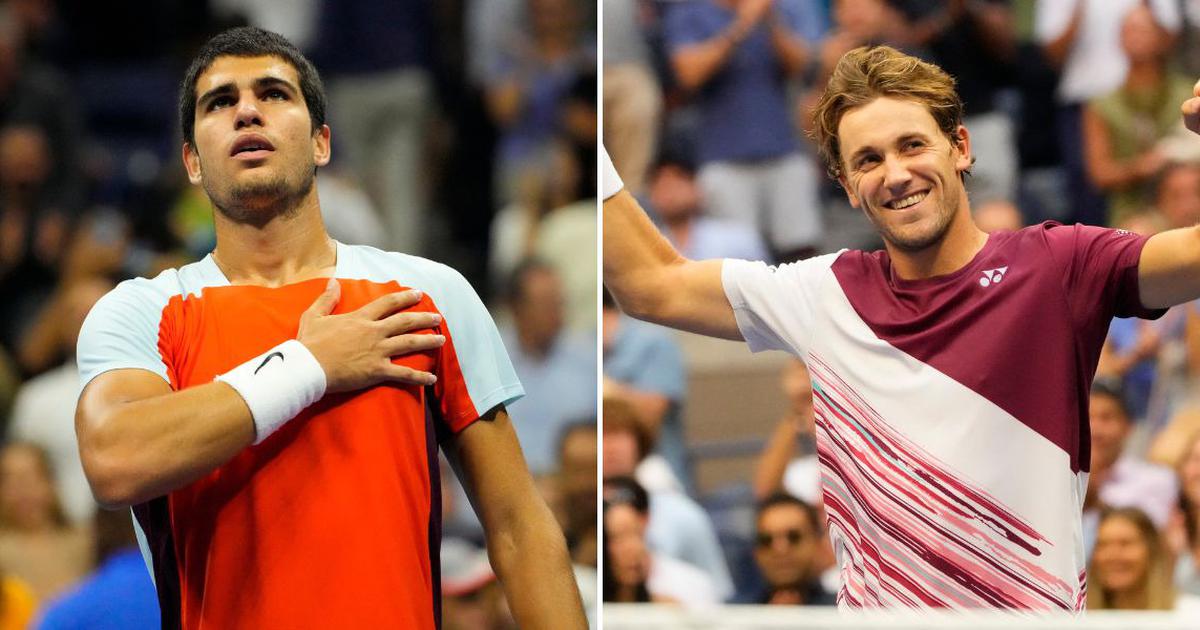 Carlos Alcaraz defeated Frances Tiafoe in a gladiatorial US Open semi-final on Friday, setting up a showdown for the title and world number one ranking against Casper Ruud.

Tiafoe went down fighting, however, saving three match points and retrieving breaks in both of the last two sets.

“We are in the semi-final of a Grand Slam, we have to give everything we have inside, we have to fight until the last ball,” said Alcaraz, the youngest US Open finalist since Pete Sampras in 1990.

For Alcaraz, who unleashed 59 winners, it was his third successive five-setter as he closes in on a maiden Slam and becoming the youngest ever world number one.

“It’s my first time in a final of a Grand Slam. I can see the number one in the world, but at the same time it’s so far away,” he added.

“I’m going to give everything that I have. I will have to handle the nerves of being in the final of a Grand Slam but obviously I’m really happy.”

“I gave everything I had, too good from Carlos tonight,” said Tiafoe.

“Honestly I came here wanting to win the US Open, I feel like I let you guys down. This one really hurts.”

Alcaraz saw two break points come and go in the seventh game of the opener before needing to save a set point in the 12th which featured a breathtaking rally that the Spaniard claimed from two seemingly losing positions.

The teenager saved three more set points in the tiebreak but Tiafoe converted his fifth when Alcaraz served up his third double fault of the 64-minute opener.

Alcaraz saved a break point in the third game of the second set, at one stage stretching for a winning point with his back facing Tiafoe to win another memorable rally.

His flamboyance was rewarded when he broke for 4-2 on his way to levelling the semi-final thanks to Tiafoe burying a return in the net.

Alcaraz had needed nine hours and 10 sets in his last two rounds, including a quarter-final which finished at 2:50 a.m. Thursday, to reach the semi-final.

However, he looked the fresher of the two men when he raced to a double break, 4-0 lead in the third set, allowing Tiafoe just three points.

For good measure, Alcaraz broke the American a third time in the seventh game.

World number 26 Tiafoe, who knocked Nadal out of the tournament in the last-16, was hoping to become the first American man in a major final since Andy Roddick at Wimbledon in 2009.

He gamely retrieved two breaks in the fourth set, saved a match point in the 10th game with a nerveless drop shot before claiming the tiebreak to send the clash into a decider.

It was an eighth successful tiebreak out of eight for the American.

Alcaraz broke for 2-0 in the fifth set only for Tiafoe to again claw his way back to 2-2.

The American, however, double-faulted to hand the advantage back in the fifth game.

Tiafoe saved two more match points in the ninth game before Alcaraz went on to seal victory in four hours and 19 minutes when his opponent netted a weary backhand.

Ruud will be appearing in his second Grand Slam final of the season after finishing runner-up to Nadal at the French Open in June.

“After Roland Garros, I was extremely happy but at the same time humble enough to think that could be my only final in a Grand Slam in my career,” said Ruud.

“They don’t come easy. So here I am a couple of months later – it feels beyond words to describe.”

The 23-year-old Norwegian set the tone for his dominance early in the semi-final when he came out on top in a 55-shot rally to convert a third set point in the opening tiebreak which his Russian rival described as “crazy”.