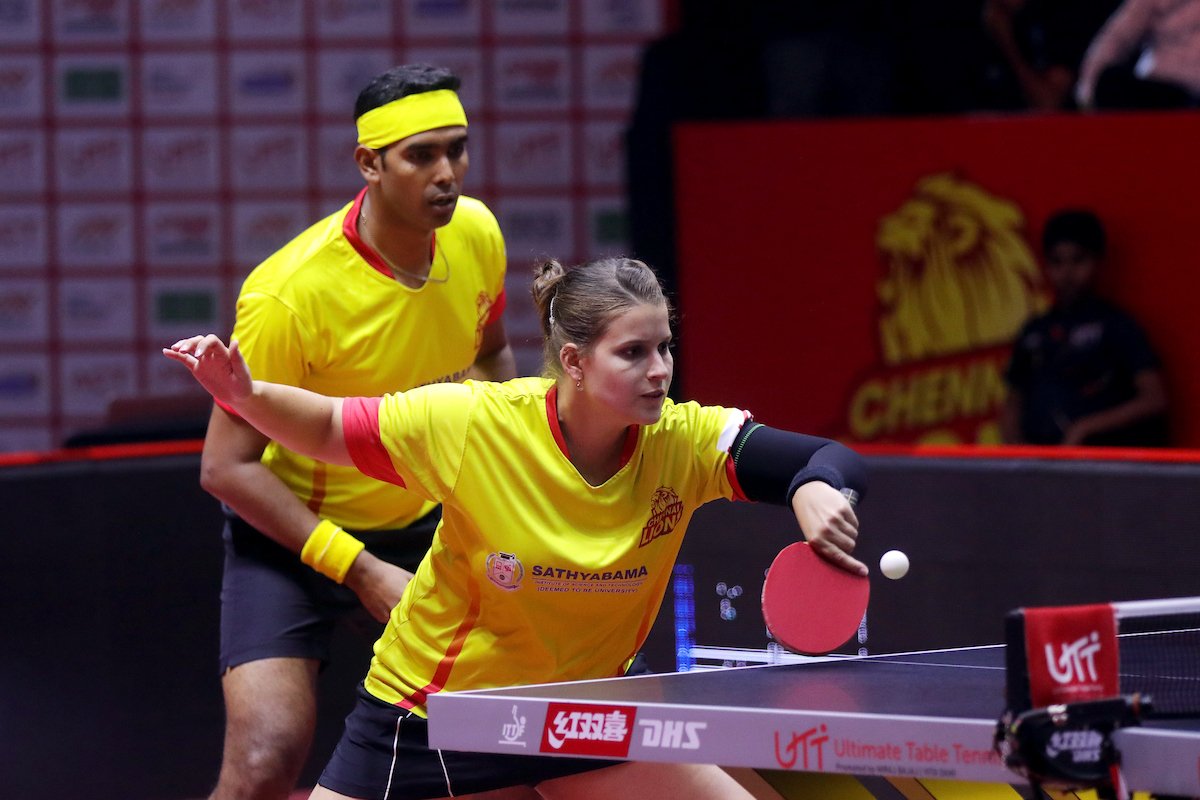 New Delhi: An explosive display by Sharath Kamal brought Chennai Lions back from the dead here on Saturday, earning himself and his team a date with Dabang Delhi in the final of the Ultimate Table Tennis.

That set the stage for two young ladies from India, Madhurika Patkar and Archana Kamath, to step into the spotlight. Needing two points from the last tie, both went for broke and produced yet another exhilarating finish in the semifinals.

Madhurika easily lost the first set 6-11 but showed remarkable poise and confidence to spurt to a 9-1 lead in the second. But Archana clawed back to 6-9 before fading away. In the decider too, Madhurika looked set for an easy win at 9-5 and 10-6.

But Archana saved four match points to take this semifinal to the golden point too. It, however, proved to be Madhurika’s day, who forced Archana into a mistake, taking Chennai Lions into the title round.

In the opening Women’s Singles, Taiwan’s Cheng I-Ching brought her A game to the table, coming back twice from behind to overpower Germany’s Petrissa Solja 11-7, 11-9, 11-8 for a 3-0 early lead for Goa.

Petrissa, placed 24th in world rankings, raced ahead in the first set and again in the third, but Cheng drew upon her experience to negate the advantage on both occasions. Cheng launched a strong comeback and displayed some exquisite shots en route to her crucial win.

In the men’s singles, Goa’s Alvaro Robles (No. 84) took the first set from a higher-ranked Tiago Apolonia (No. 71) on the golden point. Apolonia fought back in the second to register Chennai’s first point. The third proved to be a visual delight, with Tiago attacking vigorously and Alvaro defending gamely.

Alvaro was in the zone, simply retrieving everything and unnerving Tiago. The Portuguese wilted under the pressure and lost the third 3-11 to give Goa a massive 5-1 advantage.

Sharath entered the fray at this stage, and riding on his potent forehand, turned the tie around. He and Petrissa won the first two sets comfortably 11-5, 11-4.

The third one, suddenly, became tense as Amalraj Anthony-Cheng I-Ching got their act together. The scores moved mostly on serve, all the way till 8-8 before Sharath orchestrated the next 3 points.

In the reverse Men’s Singles, a charged up Amalraj broke away from Sharath at 4-4 and pocketed the first tie11-5 . Sharath came into his own in the second, moving to 6-3 quickly. He capitalised on that to take a crucial point for his side.

The third set was a humdinger, with the match fluctuating from one team to the other. Sharath took a handy 4-1 lead but a series of mistakes saw Amalraj jump ahead 6-4. He inched away to 9-8 before Sharath cooled down to whip out three straight winners.