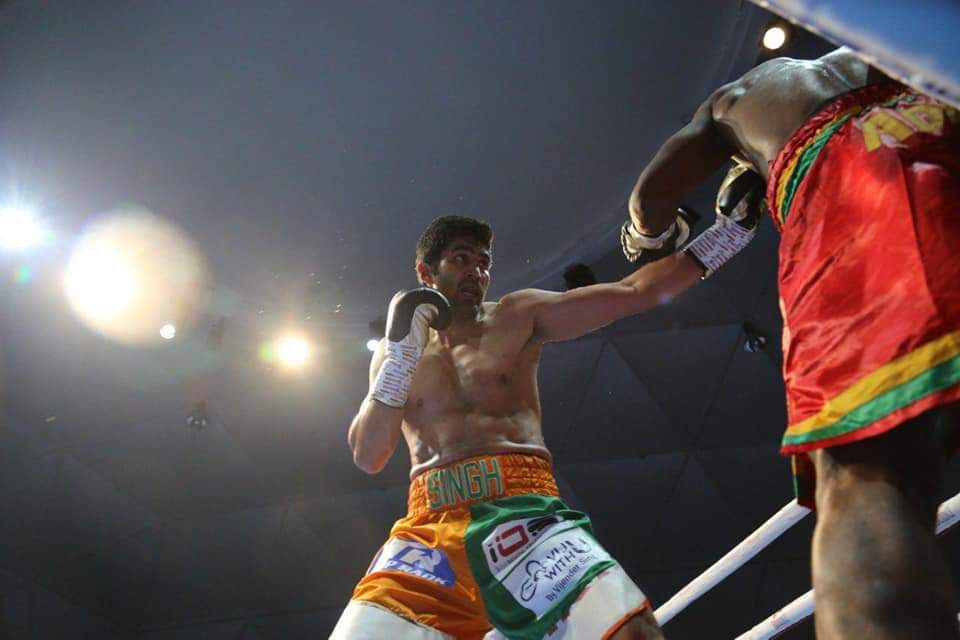 The 34-year-old former Olympic bronze-medallist, who holds the WBO Asia Pacific and Oriental super middleweight belts, prevailed in a unanimous verdict in an eight-round contest against the 42-year-old Adamu on Friday night.

The Indian’s right hand was just too precise and powerful to handle for Adamu, who looked intimidated, kept a shell guard, and was thrown off-balance more than once.

“It was a good fight, Charles Adamu is a good fighter but I was fully prepared to tackle his punches and landed my punches perfectly on him. It’s great to be here in Dubai and to get this win. It was really exciting,” Vijender said after the bout.

“I wanted to finish this fight in three-four rounds, it went into late rounds but I am happy with how I performed,” said the boxer from Bhiwani.

The Ghanian also copped a point deduction in the fourth round for excessive bending. To Adamu’s credit, he fought through despite the onslaught and ensured that the bout went the full distance.

Adamu came into this fight with an experience of 47 bouts, of which he had won 33 (26 knockouts). The Ghanian is also an Olympian and won a bronze medal for his country in the 1998 Commonwealth Games in Kuala Lumpur during his amateur days.

But Adamu’s wealth of experience didn’t seem enough against an opponent, who was quicker and more powerful.

“I tried my best. I had made strategies after watching his videos but he was quite tough. I never expected him to be this good. I wish him the best for his coming bouts,” Adamu said.

Vijender, who is promoted by Hall of Famer Bob Arum’s Top Rank Promotions in the USA and IOS Boxing in India, is hoping to fight for a world title next year.

Vijender happy with his progress in pro boxing circuit