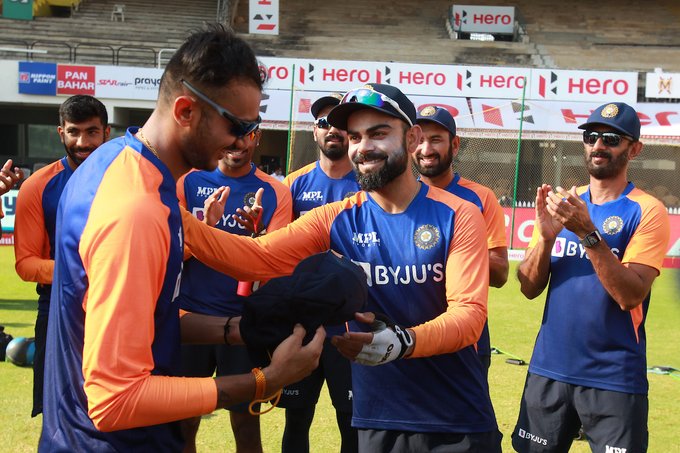 Ahmedabad: Spinner Axar Patel has said that he concentrated on improving his game to block out the negative thoughts as much as possible when he was out of the Indian team for the past three years.

Patel stormed into the Indian Test team during the four-match series against England, picking two five-wicket haul and six-fer in his debut and second Test to help India come from 1-0 down to leading the series 2-1.

Patel had already played two ODIs and 11 T20Is for India. However, he had been out of the senior national setup since a T20I against South Africa in Cape Town on February 24, 2018.

“When I was out of the team for the last three years, I was concentrating on what I needed to work on. A lot of people ask why you are not there in the team when you are not selected despite performing so well in the Indian Premier League and for India A,” said Patel in a conversation with India team mate Hardik Pandya in a video posted by the Board of Control for Cricket in India (BCCI) on its website.

“These questions come to my mind also and so I just think that I will wait for my chance and when I get it I will give it my 100 per cent. My friends and family who helped me over the past two three years, and this includes you (Pandya), all of you have taught me how to tackle problems,” he further said.

Patel’s debut in the longest format of the game came during India’s second Test against England in Chennai. He recorded figures of 2/40 and 5/60 in that match before leading India to victory at the Narendra Modi Stadium in Motera near Ahmedabad, where he plays his home matches for Gujarat in domestic cricket.

Patel dismantled England with figures of 6/38 and 5/32 as India won the only day-night Test of the series in just two days.

“It feels great. It is only my second match and the first in Motera. I loved it when the crowd chanted ‘Axar, Axar!’ when I came on to the ground. When the local crowd cheers for you it feels even better because my family was sitting in the stands. I have played all my life in front of them and my coaches,” said Patel.

Pandya also said in the video that he is proud of Patel’s performance. “As a friend I can tell you that we have been waiting for Axar’s debut for a long time. The way he has made it, we are all very proud of him. It has been all about hard work, patience and honesty which is very important in this sport,” said Pandya.