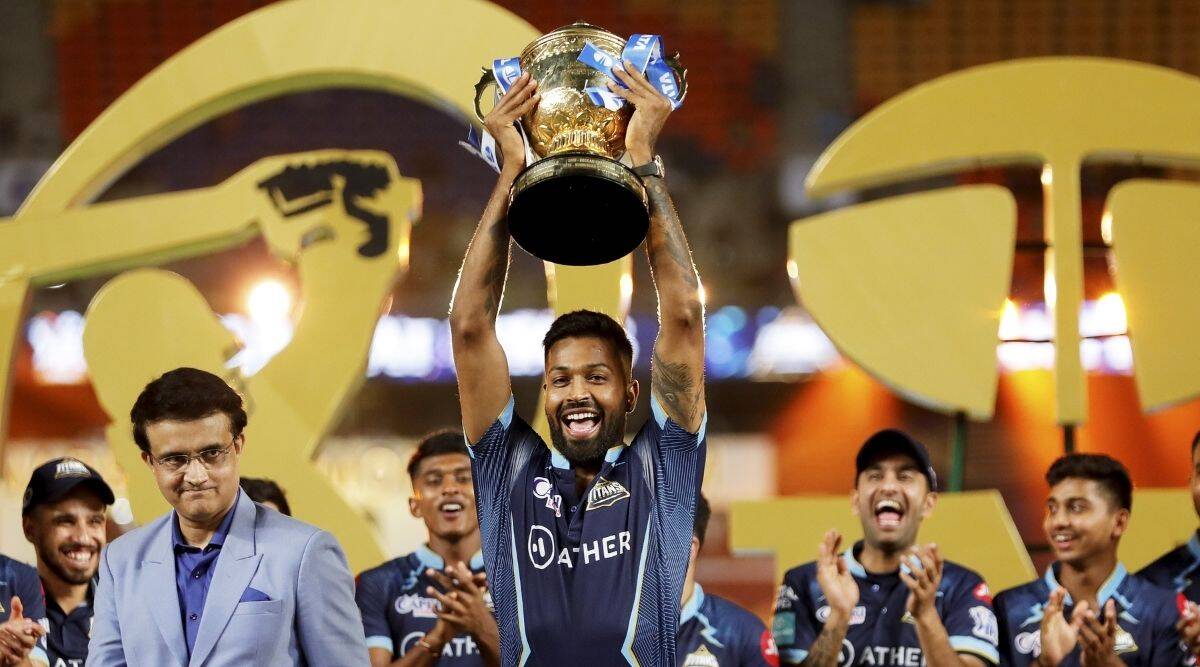 Minutes after the final was over, Hardik Pandya was quietly caressing the IPL trophy flap as one of the BCCI employees was inscribing the name of new champions ‘Gujarat Titans’.

It seemed as if an indulgent father was tousling his son’s hair with love. That trophy was indeed Pandya’s labour of love. For all the hardwork put in after some years of circumspection and uncertainties. We all saw it but he dealt with it.

His wife Natasha hugged him. It was an act of assurance — that his support system is firmly behind him, earlier in ‘thin’ and now in ‘thick’.

“I live and feed on love, which I keep getting from my family,” said the man, who won it for the Titans in first half itself with the wickets of Jos Buttler, Sanju Samson and Shimron Hetmyer.

The 34 runs in a low-scoring chase was just the cherry on top.

On May 29, 2022, India just got another genuine white-ball captaincy option in Pandya.

His MS Dhoni style of calm leadership, has blind-sided even the best of cricket analysts in the country, who wouldn’t have remotely considered him of being a left-field choice in their wildest of dreams even three months back.

But dream has turned into a reality and Pandya has walked the talk as a leader with 487 runs and 8 wickets.

“I have always enjoyed responsibility and been someone, who wants to lead from the front, so that I can set an example,” Pandya told reporters during virtual conference.

“If I want my team to function in a certain way, I need to be the first flag-bearer to show them the way. So that, it makes more sense if I do it first,” Pandya spoke with conviction and all who listened believed him.

Hardik in his six-year start-stop international career has played one ICC final (Champions Trophy in 2017) and two semi-finals (T20 World Cup in 2016 and ODI World Cup in 2019).

On June 9, it will be one of the sweetest of comebacks for Pandya in India Blue and the eyes are trained on a World Cup triumph. There are two in next 16 months — one in shortest version (T20) and other in shorter version (ODI).

“It’s about winning the World Cup for India, no matter what happens. I have always been that guy to put the team first, so the goal will be to see my team gets it (global trophy) most,” he said.

“Playing for India has always been a dream come true. No matter how many games I have played, I have always got support and love. In the short and long term, one goal is there. I want to win the World Cup no matter what happens,” he makes his priorities crystal clear.

This IPL Trophy is more special than other four

Lifting the IPL trophy isn’t a new experience for Pandya but guiding a new team in its first year is certainly super special and he makes no bones while admitting it.

“This is a bit more special as I got it as a captain. But those earlier four (2015, 17, 19, 20 with MI) were equally special. I am insanely lucky to win five out of five IPLs, but this IPL trophy will create a legacy,” Pandya declared in his booming baritone.

When Hardik was picked by Gujarat from the draft, his first endeavour along with head coach Ashish Nehra was to pick a potent bowling side and accordingly, they assembled a cracking unit — Mohammed Shami (20 wickets), Rashid Khan (19 wickets), Lockie Ferguson (12 wickets) and rookie Yash Dayal (11 wickets).

“People say T20 cricket is a batter’s game but it is the bowlers, who win you matches,” he said.

But the skipper explained his rationale behind concentrating on bowling line-up.

“Because if the batters are not putting up a par-score, then you need a gun bowling line-up, so we have always ended up giving 10 runs less. On tracks, where other teams have gone for 190, we have perhaps restricted sides to 180,” Pandya elaborated.

“Obviously 10 runs make a big difference in larger context as it can decide on winning and losing.” “For me and Ashu paa (Nehra), at the start, our endeavour was to create a strong and experienced bowling unit, so that if batting doesn’t click occasionally, we can pull things back, so that was very important.”

From the garish jackets and the blingy diamonds and flashy in-your-face lifestyle during initial years, Pandya’s transformation from a brash youth to a responsible man has been an incredible one.

Wife Natasha, son Agastya, brothers Krunal and Vaibhav, sister-in-law Pankhuri form his core circle, people who are like his protective human shields from the vulnerabilities.

“Natasha is someone very emotional and gets very happy when she sees me doing well. She has seen me going through a lot of things and putting in hard yards, no matter what has happened, I have worked hard, that is something I don’t speak about but she knows how much hard work goes behind the scenes,” the husband in Hardik was full of gratitude.

“My family has been my strong pillar. My brother Krunal, my sister-in-law Pankhuri, my other brother Vaibhav. Lot of people, who have been fantastic in ensuring that I stay in best mind space whenever crunch situations come.

“My brother (Krunal) as well cried, when I called him, my sister-in-law cried. Those were tears of happiness. I know that I can perform out there on the field as these people are all behind me,” he concluded.