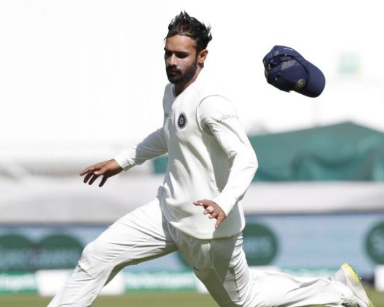 New Delhi: India batsman Hanuma Vihari, who played a crucial role in helping the team secure an epic draw alongside Ravichandran Ashwin against Australia in Sydney, has revealed that they didn’t try to go for the win once Rishabh Pant and Cheteshwar Pujara got out.

Chasing a mammoth target of 407 on the final day of the third Test, India reached 334/5 after batting for 131 overs before the match ended in a draw.

Vihari, who batted with a sore hamstring throughout the course of his innings, showed great resilience and remained unbeaten on 23 after facing 161 deliveries. He was supported brilliantly by Ashwin who also suffered a lot of blows on his body but didn’t throw away his wicket and remained not on 39 from 128 deliveries.

Before the 62-run stand between Vihari and Ashwin, Pant and Pujara had shared a 148-run partnership for the fifth wicket. The duo scored runs at a brisk pace and in fact, not only put India in a position to draw the Test, but also gave the visitors an unlikely hope of an improbable win.

“If you look at the first session and most part of the second session, we were looking good for a win. The way Rishabh (Pant) and (Cheteshwar) Pujara played. To be honest, once they got out, I don’t think a win was a possibility. Even before my injury, Ash (R Ashwin) was struggling with his back, (Ravindra) Jadeja could have played only a few overs if needed,” Vihari said while speaking to ESPNcricinfo.

“The draw came in when we knew that Ash couldn’t run, and then when my hamstring injury happened, we knew we just had to bat out time. And it is not an easy task (for one partnership) to bat out 43 overs. Australia, day five, against that attack,” he added.

Vihari further revealed that, he and Ashwin, both decided to bat one over at a time.

“We had a conversation every over about what we needed to do. The strategy also helped. We got messages from outside but we had already decided that he was going to face (Nathan) Lyon and I would face the fast bowlers. One he was batting well against Lyon and also I couldn’t stretch against the spinner with my hamstring,” said the right-handed batsman.

“It panned out well. He was facing Lyon with ease on a day-five pitch, and I was pretty comfortable against the fast bowlers,” he added.

The draw in Sydney set the platform for a memorable win in Brisbane, which sealed what was considered a near-impossible series victory against Australia in Australia.

Vihari further revealed that the team never spoke about the first Test result, in which they were bowled out for mere 36 – India’s lowest total in Test cricket.

“After the Adelaide Test, you won’t believe, we as a team we never spoke about the game. We only felt that it has never happened before, I don’t think it will ever happen again. It was a freak innings,” said Vihari.

“So let’s move on and let’s look at it as a three-Test series from Melbourne. Now if you look at it, we have won the series 2-0. The Indian team, the character and the fight we show, we leave everything on the ground. That’s the hallmark of the Indian team. That’s exactly how we played,” he added.

The 12-Test veteran also revealed that he was in so much pain after the Sydney Test that he could hardly sleep that evening.
“I hardly had any sleep. Again, with pain. One thing was pain and the other thing was I was happy and overwhelmed with the respect and love I got on the internet, in the messages I got. I think I slept for one hour and got up again at 6 in the morning. That is the kind of feeling I got,” said Vihari.

“I would say for all the years of hard work I had done in first-class cricket, where there are no people watching you play and you have to go through the grind and struggle, and to have 1.3 billion watching back home and all the people in the world watching you save a Test match… That was the thought that came into my mind. Real satisfaction of going through the grind in the first-class arena and then achieving this, the satisfaction was really amazing,” he added.

Vihari is not part of the India squad for the first two Tests of the upcoming four-match series against England beginning February 5 in Chennai. He is currently at the National Cricket Academy in Bengaluru and has started his rehab.