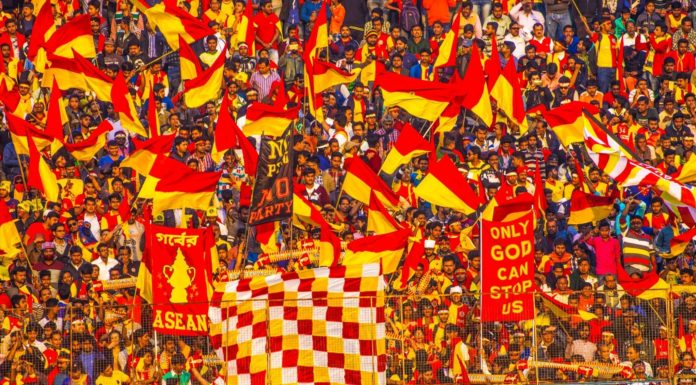 Financial woes, poor form, administrative problems nothing has stopped East Bengal fans from supporting the club on their centenary year.

New Delhi: Indian Arrows are the true journeymen of domestic football. Venues across the country are home sweet home for them. This season, it began with Bhubaneshwar. Then they shifted to Goa. Now, Mumbai is the latest addition.

It’s the part of developmental scheme. May be.

At the start of the week, there was an interesting scene when Arrows played their “home” match at the iconic Cooperage against East Bengal.

Two thousand kilometres away from their home base at the eastern metropolis, the red and golden brigade attracted more fans than many other teams do at their own backyards. A couple of thousand fans cheered and backed East Bengal vociferously throughout the tie.

Well, it wasn’t an unusual show. The two Kolkata majors always draw good number of faithfuls at every soccer centre. From Kashmir to Kanyakumari. Wherever they play; whenever they play.

The Cooperage encounter was an eye opener for a different reason. East Bengal’s on-field form has hit the rock bottom in their centenary year.

They have lost more matches than they won in I-League so far. The dream of winning the maiden title has already vanished into thin air. The grim battle now is to stay afloat.

Yet, their loyal fans haven’t deserted them. They were aware Arrows had beaten their favourite side in the previous meeting. That, too, on their home turf. The foreigners are performing below par. The coach for the season has run away. The sponsors are set to follow the coach, bag and baggage.

But, still they come. And come in numbers. It’s a matter of pride since fans are the backbone of a soccer club. All over the world. They did not turn their faces away when Juventus were sent to second division. They cried when Bury FC were thrown out of the league.

This cannot be bought by lure of money or glamour.

Then why this sudden clamour in East Bengal to gatecrash into another league from the next season? Why this false notion is being created that East Bengal could be up for sale if they don’t change track?

The game plan is clear. It’s a soccer disinvestment policy. Buy out what you can’t patiently build over the years. Use the goodwill but destroy the structure to suit purpose.

One can be accused of making too harsh a statement. Definitely. But will East Bengal or Indian football be greatly affected if they continue to play in the I-League? Or will the flagging fortunes of India’s domestic football spring to life by East Bengal’s entry into a cash-rich league?

Let’s make one thing clear. Despite their current form and immense difficulty to find the next set of sponsors, East Bengal’s staying power in Indian football will remain more than many others. (Should we need to name those?) At least for few more years.

East Bengal need not to lose sleep over what their arch rivals did. Instead, they should clean up the mess inside their own club tent. Lack of sponsors to board a luxury ship is not their main problem. Absence of faithful officials has chiefly let them down.

No one should be in a hurry to sale off the club’s 80 or 90 per cent stake to a willing party just to wrap themselves up in pretentious glamour.

The club should put more faith in their fans. They will not desert the club overnight if East Bengal play in Calcutta Fotball League (CFL), Durand Cup or IFA Shield only.

The only problem is, barring in CFL, the football fans will be deprived of the legendary clash between two Kolkata rivals, perhaps the sole selling point of Indian football. The cash and glamour show is yet to find an equal to it.

Learn to exercise the art of patience and respect the fury of nature, said Paulo Coelho. East Bengal can always listen to the advice of the Brazilian novelist.

Who knows on which side of the bread butter will be in the near future? East Bengal are still a bigger brand than many others. The club’s future does not wholly depend on artificial support system.