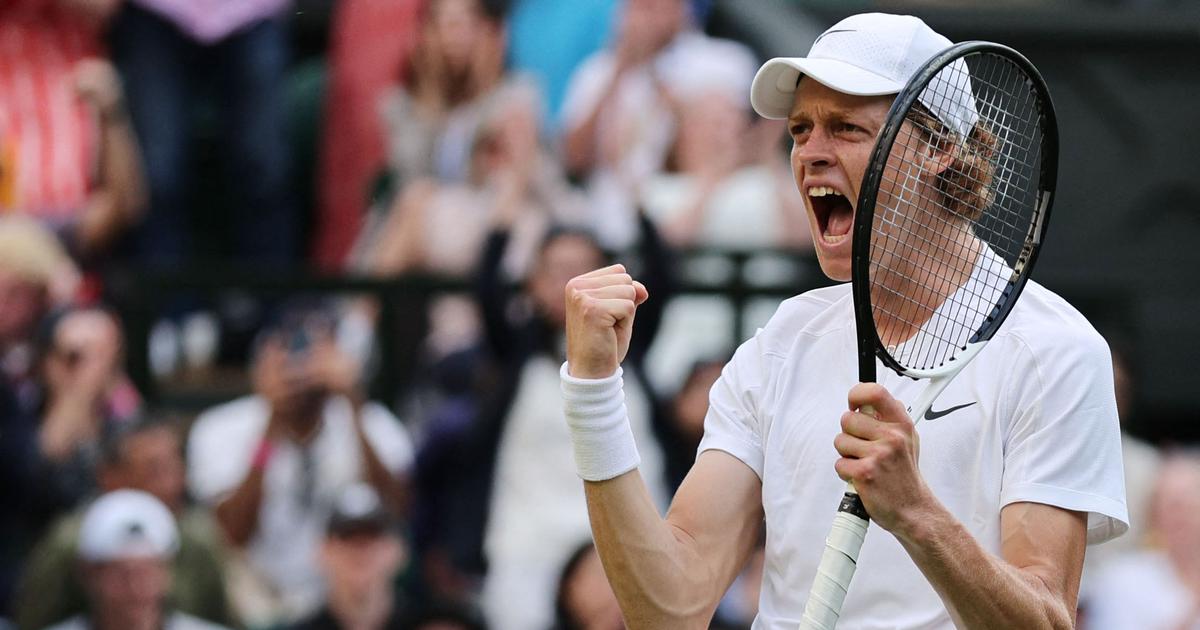 Six-time champion Novak Djokovic reached his 13th Wimbledon quarterfinal on Sunday, as injury-stricken rival Roger Federer revealed his desire to play at the All England Club “one more time”.

“He was very tough. I have never faced him before,” said Djokovic after racking up a 25th successive win on grass.

“He has a great serve, powerful forehand and nice touch.”

Earlier on Sunday, fifth seed Carlos Alcaraz, who had been expected to face Djokovic in the last-eight, was beaten by Jannik Sinner.

Sinner, who had never won a grass court match before this Wimbledon, is the youngest man in the last-eight since Nick Kyrgios in 2014.

“Carlos is a very tough opponent and a nice person. It’s always a huge pleasure to play him,” said Sinner after making the quarterfinals of a Slam for the third time.

Sinner needed six match points to seal the deal while Alcaraz was left to regret failing to convert any of his seven break points.

For the first time, play took place on middle Sunday.

It has traditionally been a rest day with the exception of a handful of occasions when rain in the opening week forced a quick planning reset.

The action on Centre Court was preceded by a parade of champions to mark the 100th anniversary of the stadium.

‘Knee rough on me’

One of those present was eight-time champion Federer, who is sitting out the 2022 tournament as he continues his slow recovery from knee surgery.

However, he insisted that he plans to be back in 2023, even though he will be within sight of his 42nd birthday.

“I hope I can come back one more time,” said the 20-time Grand Slam winner. “I’ve missed it here.”

Federer has been out of action since a quarterfinal loss at Wimbledon last year before undergoing another bout of knee surgery.

“I knew walking out here last year, it was going to be a tough year ahead,” said Federer.

“I maybe didn’t think it was going to take this long to come back – the knee has been rough on me.”

Belgium’s David Goffin defeated Frances Tiafoe of the United States in the longest match at this year’s Wimbledon to reach the quarterfinals.

The World No 58 will next face Britain’s Cameron Norrie who reached a Grand Slam quarterfinal for the first time, sweeping past Tommy Paul 6-4, 7-5, 6-4.

The Tunisian made the last eight for a second successive year, beating Belgium’s Elise Mertens 7-6 (9), 6-4.

Jabeur, who will face Marie Bouzkova for a semi-final place, said she wanted to be a trailblazer for Arab and African players.

“I wish I could really give that message to the young generation not just from my country but from the African continent,” she said.

‘Don’t know how I got here’

Bouzkova, the World No 66 from the Czech Republic, breezed past Caroline Garcia of France 7-5, 6-2.

Mother-of-two Tatjana Maria is also through to her first Slam quarterfinal, 15 years after her debut.

“It makes me so proud to be a mum – that’s the best thing in the world,” said Maria, who only returned from a second maternity leave less than a year ago.

Ostapenko grumbled: “She didn’t really do anything today. She was just waiting on my mistakes.”

Maria will face fellow German Jule Niemeier for a place in the semi-finals after the World No 97 beat Heather Watson 6-2, 6-4.

Wimbledon Day 6: Swiatek run ends, Nadal through to fourth round