With potent outswinger, Bumrah is now a true all-round bowler 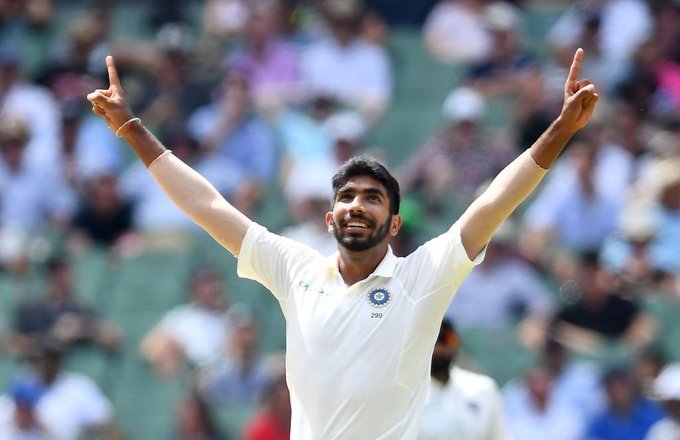 Jasprit Bumrah is only the third Indian to claim a hat-trick in Tests.

Mumbai: The two-month rest after the Word Cup has done wonders to Jasprit Bumrah.latest sports news in english

He has returned in a new avatar, more lethal, more venomous and the potency of his bowling after the break must have surprised him too.

The way he bowled in both the Test matches against West Indies was something new. All along he has been bowling his inswingers with authority. But against the Caribbean side, it was evident he was trying to bowl more outswingers.

The outswinger is always a difficult ball to master. Some bowlers take a long time, some possess it naturally, like former India pacer S Sreesanth.

Before the spot fixing scandal destroyed his career, Sreesanth was a treat to watch. His line, length and control over the outswinger was spot on.

Bumrah’s unorthodox action was also an impediment in his path to master the outswinger. In England and Australia, he consistently pitched the ball up while trying to take the ball away from the batsman.

It allowed batsman to drive him for runs comfortably. But in West Indies, he is a transformed bowler. He is hitting the right line and length as an outswing bowler.

His slanted action makes it easier for him to bowl the inswinger, thereby giving him more control over it. But for outswingers he has to work extra hard to be on target. Otherwise he would be creamed for runs.

The selectors and the team management were right to rest him after the World Cup. It allowed him time to hone his skills at the National Cricket Academy (NCA), particularly different grips of bowling.

Every bowler has a unique grip. It can’t be copied as the fingers and palms of individuals vary.
Bumrah is not only a clever bowler but a keen learner. He has perfected the art of bowling yorkers from his Mumbai Indian team mate Lasith Malinga and also developed a steep bounder.

He has several varieties of bouncers and on top of that now he has an outswinger. His mixture of inswing and outswing has made life difficult for the batsmen. His wippy action and slanted point of release of the ball, gives batsmen less time to negotiate the swing.

The Sabaina Park pitch was green. But West Indies couldn’t use the conditions effectively despite being the hosts and winning the toss. Had India bowled first, they would have used the conditions better.

Another key factor for Bumrah’s success is Kohli’s intelligence to use him. In the Ashes, England skipper Joe Root gives a lengthy spell to his premier wicket takers. But Kohli is using Bumrah in short bursts. Bumrah’s run-up is small, he barely runs, infact he walks to the crease and takes a giant last stride.

The last stride helps him generate pace. Keeping in mind his unusual bowling style, it is imperative he be used for short spells, otherwise there’s always the risk that he might break down.

The team management should keep in mind that there is a lot of Test cricket to be played this season. Hence Bumrah must be wrapped in cotton wool.

Having mastered outswingers too, he is destined to serve Indian cricket with distinction for a long time. It is the team management’s job to ensure that he does justice to his enormous potential.

Lot of debates in Indian cricket. First it was the presumed bad relationship between Virat Kohli and Rohit Sharma.
Now with Rohit not finding a place in the Test line-up, again the debate has surfaced.

This is a non-cricketing issue. But in picking Hanuma Vihari, the team management has been proved right.
It was presumed that Rohit being the senior guy would get the nod to bat at No. 6. But Vihari has brought a calming influence to the middle order.

He is not a typical Hyderabad batsman, who are famed for being wristy and elegant. From Mohammed Azharuddin to VVS laxman, the Hyderabadis are known for their touch play.

But Vihari is a typical Mumbai-type khadoos batsman, who takes his time to build an innings. He could also be tried as an opener.

What a way to start the test championship! @BCCI pic.twitter.com/5InoIhpyTy

A Test opener must have good technique. Ajinkya Rahane started as an opener then came down to the middle order in all three formats.

He has all the shots in the book but in Tests, he goes into a shell while batting, No wonder he needed 29 innings to score his maiden century.

Any other country would have dropped him after repeatedly getting out in the 20s and 30s. But he exudes a rare calmness while batting that is essential to succeed as a Test batsman.

The series victory against West Indies showed that India’s Test is settled. The only debatable decision might be playing Ravindra Jadeja instead of Ravichandran Ashwin.

Lovely batting by @Hanumavihari to get to his 1st 100. Also very good to see @ajinkyarahane88 get back in form.
The maturity & patience they have shown is a good sign for the Indian Test team.#WIvsIND pic.twitter.com/T5EaNxGdpn

Head coach Ravi Shastri has clarified that conditions demanded Jadeja’s inclusion. That’s a perception of the coach and we have to respect it.

That’s the beauty of cricket. Debates continue off the field irrespective of the team’s performance on it.

The West Indies are a much weakened side now. But it still doesn’t dilute the credit of Kohli’s boys.

The West Indies trip will be followed by home series’ against South Africa and Bangladesh. In India, the team is expected to go back to the two pacer, two spinner combination, broadening the chances of Ashwin.