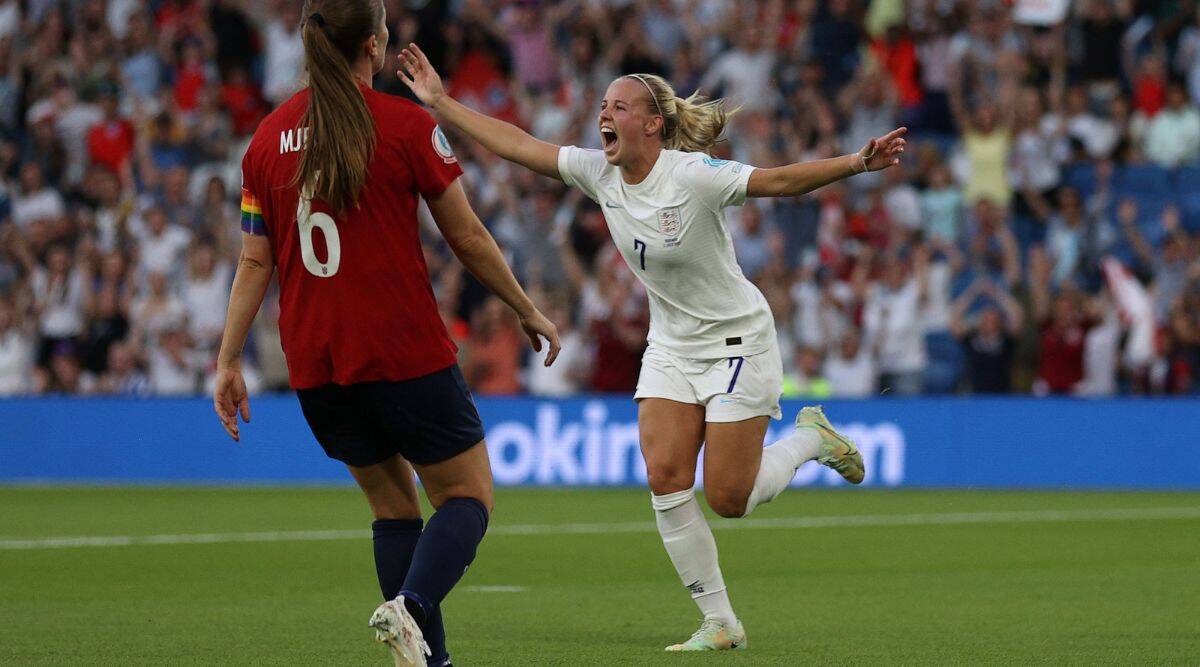 England hammered Norway by a record 8-0 margin in a sensational display at the Women’s European Championship on Monday, as the host became the first team to book a place in the quarterfinals and the first to score eight goals at a Euro finals.

England, which on Wednesday left a Women’s Euros record crowd at Old Trafford wanting more after its 1-0 win against Austria in the tournament opener, dominated the match against poorly-defending Norway, its toughest group opponent on paper.

The forward initially saw the offside flag go up, a decision that was overturned following a VAR intervention.

England, which is on its longest-ever unbeaten run of 16 games – all under coach Sarina Wiegman who took over from Phil Neville in September 2021 – already led 3-0 before the 30-minute mark, after forward Ellen White joined the scoresheet.

Mead went on to add two more goals for England inside four minutes, first nodding home after a wonderful cross from Hemp and then taking advantage of an individual effort.

Pressing high and threatening to score from every attack, England made it 6-0 before halftime as White stretched to put the ball in once more following a fine cross from Fran Kirby.

England’s top scorer White improved her record to 52 goals and needs only one more to join Wayne Rooney as the country’s most prolific international player of all-time.

A fine header by Alessia Russo in the 66th and another strike from Mead for her hat-trick nine minutes from time wrapped up the win as England became the first side at a Euros – men’s or women’s – to score eight goals in one game.

“I can’t put it into words. I’m just loving being here, loving being part of this team and loving every minute,” Mead told the BBC.

“It’s an incredible feeling to feel how I do right now. I don’t think I even dreamt of this. I’m just so happy I got the goals to help the team.

Norway, which is playing at its 12th Euros – the joint most alongside Italy – barely resembled the team which got its tournament off to a flying start as it beat Northern Ireland 4-1 on Thursday.

“I felt we were opening the game quite strong, and then we get (concede) the first goal and then there’s just a clear way for England and goal after goal, which is unacceptable,” forward Ada Hegerberg said in a post-match interview.

“It’s a tough reality right now. Obviously, we’ve got to get to the bottom of it and keep reaching high.”

England has topped Group A on six points ahead of Austria, which beat Northern Ireland 2-0 on Monday to earn their first three points.

Norway, twice European champion, dropped to third on three points with the Irish yet to earn a point after two games.

Austria picked up its first points in this year’s Women’s European Championship with a 2-0 win over Northern Ireland, thanks to goals from defender Katharina Schiechtl and substitute Katharina Naschenweng at St. Mary’s Stadium on Monday.

Austria went ahead in the 19th minute after midfielder Sarah Puntigam’s low free-kick near the edge of the box took a slight deflection off Irish defender Julie Nelson and Schiechtl found space to tap the ball home at the far post.

The 2017 semifinalists scored a second goal before halftime when Barbara Dunst tried to lob Jacqueline Burns following a defensive error. Still, the Northern Ireland goalkeeper did well to tip it onto the bar.

Naschenweng, who came on in the 73rd minute, finally doubled Austria’s lead in the 88th after she charged into the box and clipped a composed low shot into the bottom corner.

Northern Ireland, the lowest-ranked side in the tournament, was playing without forward Simone Magill after she was ruled out of the campaign with a knee injury.

It showed more intent in the second half but failed to create clear chances in their quest for goals, suffering its second straight defeat to remain bottom of Group A.