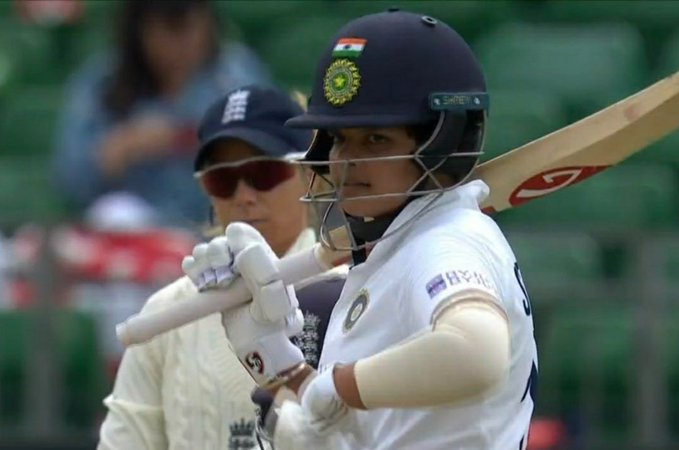 Bristol: Shefali Verma hit a brilliant 96 on debut, while Smriti Mandhana made 78 before five quick wickets derailed India Women as the visitors slumped to 187 for 5 in their first innings in reply to England’s 396 for 9 declared at stumps on the second day of the one-off Test here on Thursday.

Verma and Mandhana shared a solid 167 runs off 48.5 overs for the opening stand before both departed in quick time as the collapse started for India.

If that was not enough, Shikha Pandey, skipper Mithali Raj and Punam Raut too got out in quick succession as India lost five wickets in a span of just 16 runs to hand England the upperhand.

At the close of play, Harmanpreet Kaur was batting on 4 in the company of Deepti Sharma with India still trailing England by 209 runs.

Earlier resuming at the overnight score of 269 for six, England lost Katherine Brunt (8) and Sophie Ecclestone (17) in the morning session but Sophia Dunkley continued to frustrate the visitors, remaining unbeaten on 74.

Debutant off-spinner Sneh Rana was the pick of the bowlers for India with figures of 4/131, while Deepti Sharma (3/65) too impressed with the ball.

India are playing their first Test in nearly seven years.