Woods storms into contention at The Masters 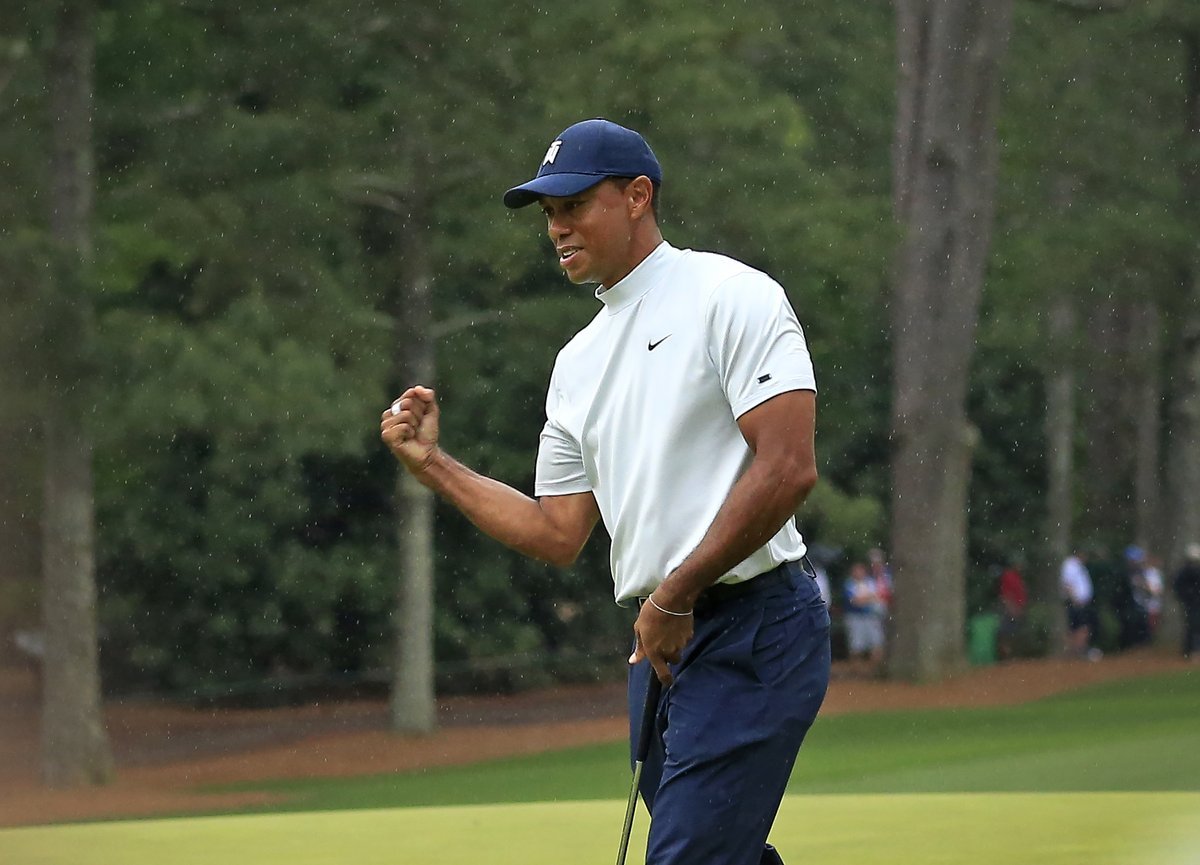 Tiger Woods was tied sixth at six-under par 138 at the halfway stage on Friday. Photo: Twitter

Augusta (Georgia): Five past major champions took a share of the lead after an exciting second round at the Masters, but all eyes will be on the man who finished one shot behind – Tiger Woods.

The four-time Masters champion turned what could have easily been a 64 into a 68 and was tied sixth at six-under par 138 at the halfway stage on Friday.

The five players have combined for seven major titles in between them, but Woods alone has 14 and extremely hungry for more.

Asian Tour member and Augusta rookie Justin Harding (69) was the only unheralded name in the mix as ten players finished the second day within one shot of each other at the top of the leaderboard.

Joining Woods and Harding at six-under par were Dustin Johnson (70), the 2016 US Open champion and Xander Schauffale (66), the 2017 PGA Tour Championship winner.

Woods could have easily gone way past them, but he missed at least four birdie putts from inside 10-12 feet. He was also even par for the four par-5s at the Augusta National Golf Club, which was akin to giving away at least a couple of shots to the field.

He also made a couple of monster putts, picking up shots on the 14th and 15th holes courtesy 30-footers. He also escaped serious injury on the 14th hole after hitting his second shot when a security guard slipped almost into his ankles while trying to control the crowd.

“I feel like I played my own way back into the tournament,” Woods said.

“I was just very patient today, felt very good to be out there doing what I was doing. This is now three straight majors that I’ve been in the mix and so it’s good stuff.

“I am not too concerned about the putts. They were good strokes and just bad reads.”

.@AdamScott played the final 11 holes of his second round in 4-under par to claim a share of the 36-hole lead. #themasters pic.twitter.com/gYpS7r1N0e

Molinari, who claimed all five points in his matches for Europe in the Ryder Cup, has never finished better than in a tie for 19th place at the Masters, and his 67 was his best round ever at Augusta.

The Italian revealed he was reaping the rewards of all the hard work put in ever since he played the third round of the 2014 Open Championship with Rory McIlroy and Johnson and was left impressed by their overall game.

“I saw that I didn’t stand a chance, really,” recalled the 36-year-old Italian, who worked on his long game, as well as his short game with renowned coach Phil Kenyon. “I didn’t play my best golf, but even if I had, there wasn’t much I could do to compete against them.”

The fact that he improved in both the areas was evident as he came in with a bogey-free round.

The 28-year-old Koepka started with a birdie and then followed it with a double bogey on the second when he pulled his tee shot into the left trees. Still one-over after seven holes, he showed great patience and composure and came home with birdies on the eighth, 15th and 18th holes.

The American, who can regain his world No1 ranking this week, went about his business without much celebration and promises to keep his mind blank over the next two days.

“I play my golf without any thoughts at all. When you have nothing to think about, it’s easy. If you start thinking about winning, then you start getting nervous,” said Koepka. “And I don’t really think I ever get excited. Maybe a little fist pump here and there, but not too much.”

A new leader at #themasters

Adam Scott moves into the lead after an eagle at No. 15. pic.twitter.com/gFYoSqjG8x

Scott, 38, playing some great golf again this year, had taken sole possession of the lead after smashing his second shot to four feet from 231 yards. But he three-putted the par-3 16th and had to be content with a share of lead.

While is ball-striking was pure, Scott rued a cold putter after several short misses and said: “Hopefully, the putter can warm up a little bit. It was pretty good for two days, but you know, a hot putter will go a long way on the weekend.”

Day, who needed medical attention for back pain on the second hole in Thursday’s Opening round, was planning to pull out of the tournament when his wife Ellie pushed him to go out and play.

He responded with a superb 67 that had just one birdie and said: “I was moping a little bit in the bath, and Ellie said, ‘It’s the Masters, you need to suck it up’.

“I can’t complain because she’s birthed three children and I haven’t, so she’s a lot stronger as a person than me; I just hit a little white golf ball around a course.”

World No. 1 Rose, whose position on top of the world rankings can be usurped by four players behind him, failed to make the cut after missing a four-foot putt on the 18th that could have kept him at three-over par. He finished on 148 after round of 73.

McIlroy, the World No. 3 and the hottest player getting into the week, shot a one-under par 71 and was tied 36th at even par 144.