World champion Sindhu glad to have answered critics with her racquet 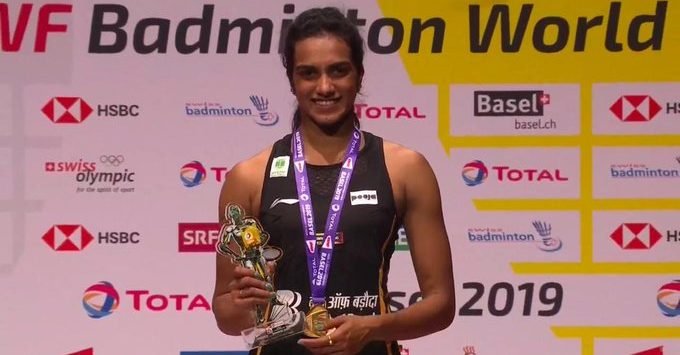 Basel (Switzerland): PV Sindhu says she felt “angry and sad” after being criticised for not finishing on top in the last two World Championship finals and the gold medal in the just-concluded edition is her answer to all the critics who questioned her. current sports news badminton game

“This is my answer to the people who have asked me questions over and over. I just wanted to answer with my racket and with this win – that’s all,” Sindhu was quoted as saying by the Badminton World Federation’s (BWF) official website after her crushing win over Okuhara. current sports news badminton game

“I felt really bad after the first World Championships final and last year I was angry, I was sad. I went through all my emotions, asking ‘Sindhu, why can’t you get this one match?’ but today came and I told myself to play my game and not worry – and it worked out,” she added.

I could not hold back my tears when I saw the Indian flag 🇮🇳 and heard the National anthem playing. Words can’t express my feelings about yesterday's win at the World Championship. Had been preparing for it for so… https://t.co/5UsuN4kWT0

The 24-year-old from Hyderabad became the first Indian to achieve the feat by thrashing familiar rival Nozomi Okuhara of Japan 21-7 21-7 in one of the most lop-sided finals ever.

It was third time lucky for Sindhu, who lost to Okuhara and Olympic champion Carolina Marin of Spain respectively in the 2017 and 2018 finals to settle for the silver twice. current sports news badminton game

Sindhu has been at the receiving end of criticism for coming short in the summit clashes of major events ever since the 2016 Rio Olympics, where she had finished second best to Marin. current sports news badminton game

Two years ago, Sindhu was denied the gold by Okuhara after an epic 110-minute final that went down as one of the greatest battles in badminton history. current sports news badminton game

The Indian also lost the finals of the Gold Coast Commonwealth Games, the Jakarta Asian Games, besides the World Championships twice. She had also finished runners-up at Thailand Open and India Open last year.

The gold was her fifth medal at the World Championships. She won a bronze each in the 2013 and 2014 editions.

Sindhu is now the joint highest medal-winner in women’s singles in the World Championships history with former Olympic champion Zhang Ning of China, who won an identical 1 gold, 2 silver and 2 bronze between 2001 and 2007.

“Everybody was wanting this win from me. After Rio Olympics silver medal, the expectations from me is really high. Every time I go to a tournament, everyone expects me to win a gold,” Sindhu said.

Now that Sindhu has added the missing World Championships gold to her cabinet, next in line for her will be the Olympic crown in Tokyo 2020.

“Olympics is not so far but right now it is step-by-step for me. I know the Olympic qualification is going so I hope I do well, but right now I just want to enjoy it and don’t want to think anything else.

“Badminton is my passion and I feel that I can win more titles,” she signed off.