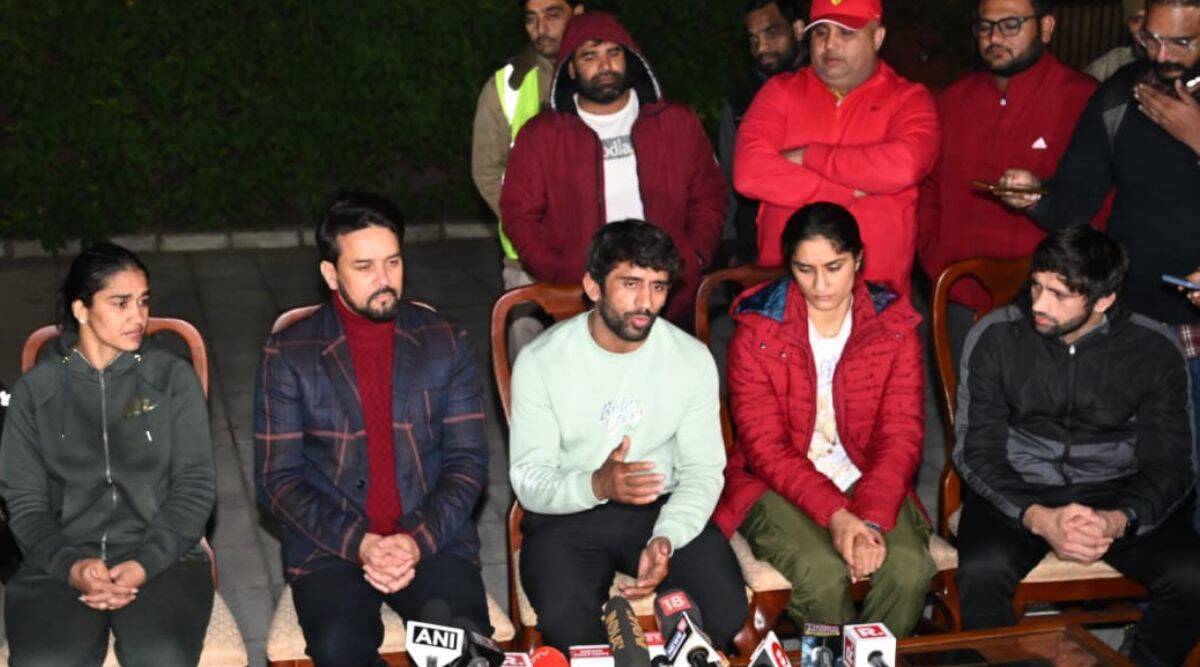 New Delhi: The aggrieved grapplers called off their protest late on Friday night after getting assurances from the government that their grievances would be addressed, the first step of which was the stepping aside of under-fire Wrestling Federation of India chief Brij Bhushan Sharan Singh.

The wrestlers, including Vinesh Phogat, Bajrang Punia, Sakshi Malik and Ravi Dahiya, decided to end their protest after a breakthrough was achieved during a marathon second round of talks with Union Sports Minister Anurag Thakur.

The government decided to form an oversight committee which will investigate the allegations of sexual harassment of women wresters by the WFI president. The committee, members of which will be named on Saturday, will also oversee the day-to-day affairs of the federation.

Making the announcement, Mr. Thakur said the committee will submit its report in one month’s time.

“It has been decided that an oversight committee will be formed, names for which will be announced tomorrow. The committee will complete its investigation within four weeks. It will thoroughly probe all the allegations be it financial or sexual harassment that have been levelled against WFI and its chief,” Thakur said after the meeting that lasted close to five hours.

Talking to media, Bajrang Punia said they never wanted to take the protest route but they were “pushed to limit”.

“The protest is over. We did not want to sit on dharna but ‘paani sar se ooper chala gaya tha’. The government has assured us safety and security, we have been threatened by the WFI president in the past also,” the Tokyo Olympics bronze medallist said, adding that 2023 was a crucial year for them as the Asian Games and Olympic Qualifiers are approaching.

Neither the sports minister nor the wrestlers took questions from media.

The wrestlers had earlier in the day said that they would lodge multiple FIRs against the WFI chief, but did not do so eventually.

It can be termed a considerable, if not major, victory for the agitating wrestlers, who had said that they would continue their ‘dharna’ until the WFI president is sacked and the federation is disbanded.

However, under the IOA constitution a National Sports Federation (NSF) can’t be dissolved unless it has violated the IOA rules and regulations, or has been de-recognised by the world body of the sport.

It must be mentioned that the wrestlers have not yet provided strong evidence that suggests sexual harassment of women wrestlers.