You don't get replacements for Amla and De Villiers overnight: Faf du Plessis 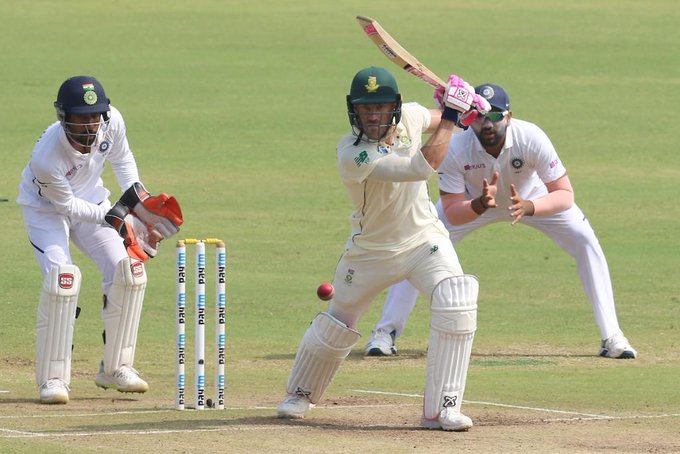 Pune: South Africa captain Faf du Plessis on Sunday acknowledged that the difference between his team and India in the ongoing Test series has been the “inexperience” of the Proteas as it’s not possible to replace world class players like Hashim Amla and AB de Villiers overnight.

South Africa were thrashed by 203 runs in the first Test and lost by an innings and 137 runs in the second Test here, already losing the series.

“I think, it’s purely a case of inexperience. I said before this Test series, your best Test teams are the teams with the most experience. When it comes to this Indian team, there’s a lot of experience in that dressing room, there’s a lot of Test matches behind their names,” a dejected Du Plessis said after losing the series and Gandhi-Mandela Trophy.

“We are at this stage where we have lost almost all of our experience. Dale Steyn, Morne Morkel, Hashim Amla, AB de Villiers, all of them were seasoned campaigners. You don’t replace those guys overnight.

He put his hands up and said that as captain he needs to show the way along with Quinton de Kock and Dean Elgar.

“For us, it is important as a senior player group to make sure that we put in performances ourselves. Myself, Deano, Quinny (De Kock), we can’t expect other guys to make runs.

“We need to make sure we make the runs first and then the others guys to chip in with us. In a time like this, it is important that your big guys really, really take control and make sure that they put in the bulk of the work,” said Du Plessis, putting across his point clearly.

Du Plessis indicated that some decisions could be on the cards for the batting unit which has now failed in three out of the four innings.

“The batting failed in the first innings and from the starting point of view, we have not started well. Every single innings, we have been in a position where we have been 40 or 50 for three. It’s a vital component as how you start in the sub-continent,” he said.

“India could be a tough place to play if you lose form. And perhaps it is a good opportunity to get some fresh heads into the team. Just from my mental point of view, it can be a place for you like, where’s my next one (hundred) going to come from.”

“Virat’s knock was incredible. Surprised that he started slow, normally he is quite busy and gets off quite well. He was quite patient in the beginning, which was required in the wicket, he left well. And then, sheer mental toughness to bat for that long. It takes huge amount of brain power. You can see that, and you can only admire from a distance.”